A tale of Cold War espionage finds screen legend Montgomery Clift as an American physicist recruited by the C.I.A. in Europe to assist a defector. This was Clift's last film. 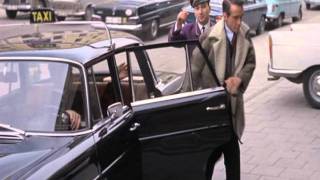 A tale of Cold War espionage finds screen legend Montgomery Clift ("Freud," "The Misfits") as an American physicist recruited by the C.I.A. in Europe to assist a defector. This was Clift's last film.

Montgomery Clift made his last screen appearance in this French-produced Cold War thriller, completed shortly before his death. American scientist James Bower (Clift) is approached by CIA agent Adam (Roddy McDowall) who wants him to perform an official mission while visiting East Germany. A Russian scientist who has defected to Germany has brought with him a cache of top-secret material on microfilm, and Adam wants James to retrieve it from one Dr. Saltzer (Hannes Messemer). However, James's secret plan is discovered by Peter Heinzman (Hardy Kruger), a Russian intelligence agent determined to keep the microfilm out of American hands and turn James against his American comrades. James wants no part of Heinzman and is determined to complete his assignment, with the help of Saltzer's nurse, Frieda (Macha Meril). Legendary filmmaker Jean-Luc Godard makes a rare dramatic turn in a small supporting role.

Spies | Mishaps | Espionage | Spy | CIA | Germany | Hit Men | Scientists | Vacations | Cold War | Russia | Old West | Love | America
This product is made-on-demand by the manufacturer using DVD-R recordable media. Almost all DVD players can play DVD-Rs (except for some older models made before 2000) - please consult your owner's manual for formats compatible with your player. These DVD-Rs may not play on all computers or DVD player/recorders. To address this, the manufacturer recommends viewing this product on a DVD player that does not have recording capability.