The story revolves around a war-surplus racket operated from an island off the Central American coast, where federal agent Robert Taylor runs into the only thing steamier than the weather: Ava Gardner. 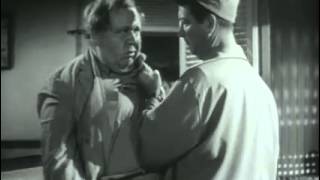 The Bribe starts with a storm and ends with fireworks - fitting bookends for a crime thriller full of passion, greed and double crosses. The story revolves around a war-surplus racket operated from an island off the Central American coast, where federal agent Robert Taylor runs into the only thing steamier than the weather: Ava Gardner. World-wise, world-weary and fabulous looking, Taylor and Gardner epitomize noir sex appeal. And the consummate actors playing the villains couldn't be more adept at oozing evil. Vincent Price portrays the suave criminal mastermind and Charles Laughton is his henchman, a sweaty wharf rat."

Federal agent Robert Taylor journeys to a mythical South American community, there to break up a war-surplus contraband racket. American playboy Vincent Price is the brains of the outfit, aided and abetted by the disreputable Charles Laughton and John Hodiak. Ava Gardner, Hodiak's wife, takes over for her husband when he's sidelined by a heart condition. Taylor tries to get to the gang boss by romancing Gardner; she eventually shifts loyalties, but Price tries to frame both Gardner and Taylor so that he can get off scot-free. Taylor finally manages to overcome Price during a oversized fireworks display at a local festival. Hampered by the old-fashioned direction of Robert Z. Leonard, THE BRIBE is slow going until its spectacular climax, which was later excerpted in toto and re-used in Steve Martin's detective spoof DEAD MEN DON'T WEAR PLAID (82).

Film Noir | Crime
This product is made-on-demand by the manufacturer using DVD-R recordable media. Almost all DVD players can play DVD-Rs (except for some older models made before 2000) - please consult your owner's manual for formats compatible with your player. These DVD-Rs may not play on all computers or DVD player/recorders. To address this, the manufacturer recommends viewing this product on a DVD player that does not have recording capability.