Who is the murderer? 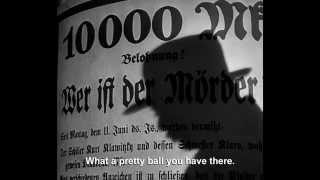 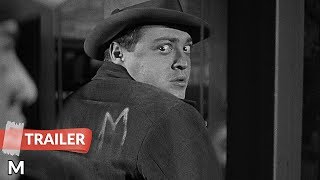 In Fritz Lang's startling and exquisite film M, fear stalks the streets of Berlin in the form of a serial child murderer whose grisly accomplishments are so heinous even the criminal minds of the underworld want him dead. Filmed in post-Weimar Germany during the infancy of the Nazi state, this tale of moral depravity serves not just as an allegory for the need of justice for all, but as an ominous foreshadowing of the sort of societal hysteria that leads to cultural witch hunts. Originally titled "Morder Unter Uns" ("Murderers Among Us"), M was one of Peter Lorre's (CASABLANCA) first major film roles. Fritz Lang's expressionistic eye plunges into the dark cityscape of Berlin, as he follows the killer whistling down the street, seducing small children with toys and candy, and eventually fleeing for his life. A city paralyzed by fear, and a vast criminal underground network of blind beggars, thieves and murderers, as well as an unforgettable climax notable for its startling statement about the murderous nature which resides within human beings, are all rendered in Lang's painterly cinematography of sharp angles, dark corners and breakneck pacing.

In Lang's chilling masterpiece about a serial child killer who terrorizes a German town, Lorre gives an unforgettable performance as the modern psychopath, Franz Becker, who attempts to attain the dignity of a tragic hero, despite his uncontrollable urge to kill. Often credited for starting both the serial killer and the police procedural film genres, M is also notable for its startling statement about the murderous nature which resides within human beings.

The Cabinet of Dr. Caligari
$20 Super Savings
Add to Cart