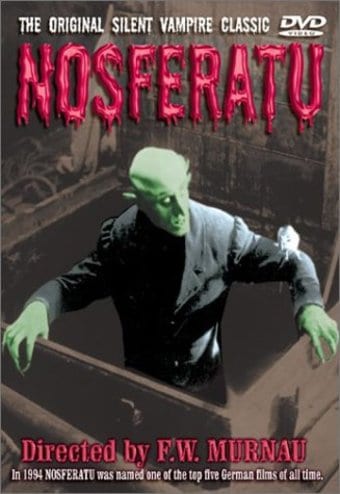 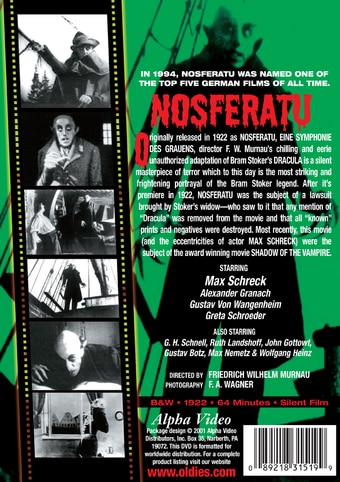 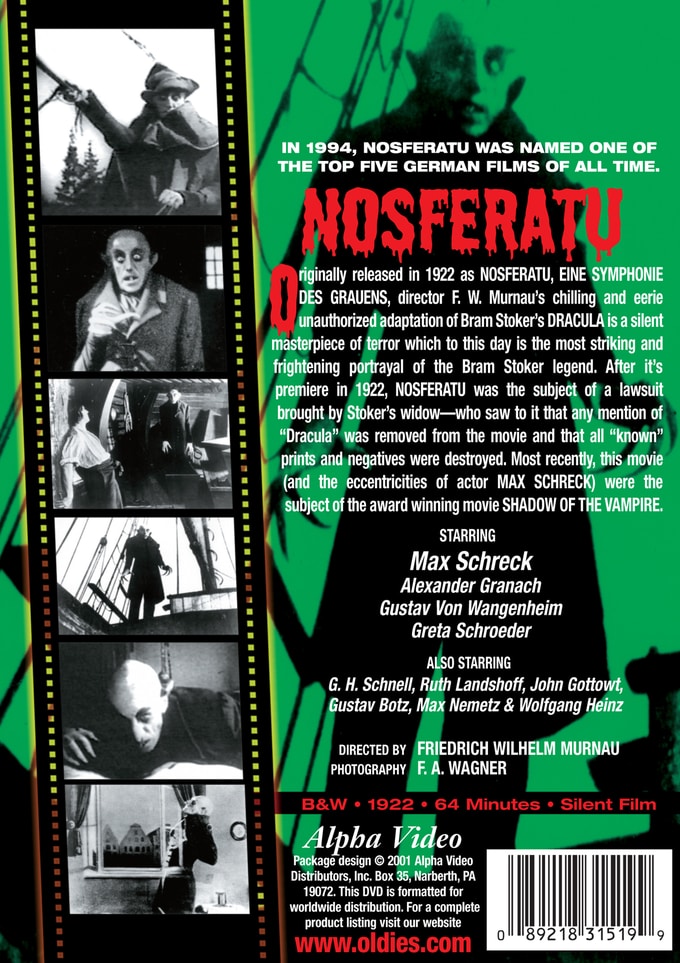 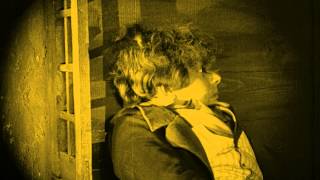 Originally released in 1922 as Nosferatu, Eine Symphonie Des Grauens, director F. W. Murnau's chilling and eerie unauthorized adaptation of Bram Stoker's Dracula is a silent masterpiece of terror which to this day is the most striking and frightening portrayal of the Bram Stoker legend. After it's premiere in 1922, Nosferatu was the subject of a lawsuit brought by Stoker's widow - who saw to it that any mention of Dracula was removed from the movie and that all "known" prints and negatives were destroyed. Most recently, this movie (and the eccentricities of actor Max Schreck) were the subject of the award winning movie Shadow of The Vampire.

F.W. Murnau's German silent classic is the original--and some say most frightening--DRACULA adaptation, taking Bram Stoker's novel and turning it into a haunting, shadowy dream full of dread. Names had to be changed from the novel when Stoker's wife charged his novel was being filmed without proper permission. Running times vary depending upon versions of the film. Count Orlok, the rodentlike vampire frighteningly portrayed by Max Schreck, is perhaps the most animalistic screen portrayal of a vampire ever filmed. The design was copied by Werner Herzog in his 1979 remake and by Tobe Hooper for his telefilm of Stephen King's SALEM'S LOT that same year. NOSFERATU is an eerie, menacing film that should not be missed.

Customer Rating:
Based on 96756 ratings.


I recently purchsed the Early Cinema Box Set with four horror classic, one of which is Nosferatu.

The edition offered here is slightly bastardized by the insertion of more than a few screens wherin Count Graf Orlok is refered to as Dracula and other charcaters are given names straight from Bram Stoker's Dracula. The charcter of Hutter is named Johnathan Hawker and many such incodents occur.

It is very important that the viewer know that the initial editon of Nosferatu made every effort to NOT relate to Dracula. In fact Stoker's widow sucessfully sued the producers citing copywright infringment.

I strongly suggest Oldies revamp this edition to reflect a more accurate portrayl n the spirit of true classic preservation or that you purchase this from another purveyor.


FW Murnau creates a pretty faithful silent version of Dracula. Murnau was one of the great silent film directors ("Sunrise" 1927) who died in an auto accident before sound came out. The cinematography is always the highlight of his films -- and the images will amaze you. The story of the making of this film was featured in the Movie "The Shadow of the Vampire" with Willem Dafoe (Oscar Nominee) playing the crazy Max Schreck who plays the Vampire.


Nosferatu is the first vampire movie ever, and it remains hard to beat. Even Bela Lugosi, in his vastly more famous version of the Bram Stoker tale, comes off as amateurish compared to Max Schreck's legitamitely scary performance. While there are several Nosferatu DVDs on the market, some of vastly better quality, I enjoyed Alpha's version because of the bizarre soundtrack. While many silent DVDs offer a faceless classical score (see Metropolis), this Nosferatu is chock full of weird "library music"--the type of avant garde jazz and classical stuff from the mid-60s to early 70s you find on forgotten vinyl LPs buried in the basement of your local library. Other versions of Nosferatu by other companies do the obvious vampire soundtrack thing--gothic industrial music and creepy heavy metal--but the oddball sounds on Alpha's disc--solo recorders, etc.--really creeped me out. I knocked a star and a half off for transfer quality, though.

25%off
7 Sins of The Vampire (2002) / Devilish Desire of Dario...
$5.95 on Sale
Add to Cart
Film Collectors & Archivists: Alpha Video is actively looking for rare and unusual pre-1943 motion pictures, in good condition, from Monogram, PRC, Tiffany, Chesterfield, and other independent studios for release on DVD. We are also interested in TV shows from the early 1950s. Share your passion for films with a large audience. Let us know what you have.
How to Order
Shipping Rates & Options
International Shipping
Return Policy
Request a FREE Catalog
Order Items by Catalog
View Catalogs Online
Safe Shopping Guarantee
Buy a Gift Certificate
About OLDIES.com
Customer Reviews
Contact Info
Privacy Policy
Send Feedback
Login
Forgot Password?
Sign Out
Email Subscriptions
Redeem Gift Certificate
To place an order or for customer service, call toll-free 1-800-336-4627 or outside the United States, call 1-610-649-7565
Open Monday-Friday: 9am-9pm, Weekends: 11am-7pm (Eastern Time)
Se habla Español! Spanish-speaking representatives available, Monday-Friday: 9am-5pm (Eastern Time)
Portions of this page © 2022 TiVo Corporation. For personal non-commercial use only. All rights reserved.
All copyrights, trademarks, and logos are owned by their respective owners. Rotten Tomatoes content and Certified Fresh™ Logo is Copyright © Fandango. All rights reserved.
© 2022 OLDIES.com and its affiliates and partner companies. All rights reserved.