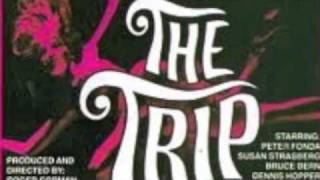 Personnel: Nick Gravenites (vocals, guitar); Michael Bloomfield (guitar); Bobby Notkoff (violin); Peter Strazza (tenor saxophone); Marcus Doubleday (trumpet, flugelhorn); Barry Goldberg (piano, harpsichord, organ); Paul Beaver (synthesizer); Buddy Miles (percussion).
Unknown Contributor Roles: Peter Strazza; Electric Flag; Harvey Brooks ; Michael Bloomfield; Nick Gravenites; Paul Beaver; Barry Goldberg ; Bobby Notkoff; Buddy Miles .
Roger Corman's 1967 film THE TRIP was controversial at its release for its ambivalent portrayal of LSD experimentation, but in retrospect it's important both for its visual innovations and as a precursor to EASY RIDER (both films starrred Dennis Hopper and Peter Fonda in differing hippie scenarios). In fact, THE TRIP's instrumental track "Flash, Bam, Pow" was used again in EASY RIDER. An appropriately contemporary rock band, the Electric Flag, was tapped to perform the former's soundtrack. The group contained some of the hottest players of the time, including members of the Blues Project and Bob Dylan's band.
Like the albums the Flag released under their own imprimatur, THE TRIP is a mix of fuzzed-up rock, soul, and blues, spiced with the occasional Pink Floyd-like sonic excursion into the nether realms. These pieces are mostly used to evoke Peter Fonda's state of mind while under the influence of LSD. Mike Bloomfield's stinging blues-rock guitar leads and Barry Goldberg's imaginative organ work are among the many individual delights here.


i have the cd and i had the album. there are only 12 tracks on the cd where there were 13 on the vinyl lp. i was dissappointed about that last blues track but it's still good, after all only bought the cd because of 4 songs.