A Swedish gymnast wishes to mate with a genius and produce the "perfect child" but problems arise when she selects a married college professor. 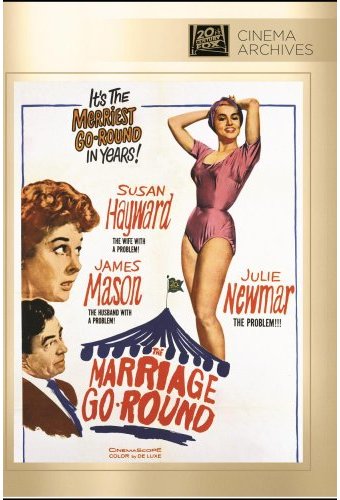 A Swedish gymnast wishes to mate with a genius and produce the "perfect child" but problems arise when she selects a married college professor.??

Leslie Stevens adapted his own stage comedy MARRIAGE-GO-ROUND for the movies, watering down the more explicit sex talk but keeping its sly innuendo intact. The stunning Julie Newmar plays a Swedish gymnast who wishes to mate with a genius and produce the "perfect child." She chooses professor James Mason for this honor, which wouldn't have been such a problem had not Mason already been married to Susan Hayward. Mason is tempted, but ultimately the head wins out over the libido and the professor returns to his wife, while the decidedly unpregnant Newmar returns to Sweden. MARRIAGE-GO-ROUND is inclined towards staginess, but this can be forgiven whenever Julie Newmar, recreating her Broadway role, sashays into view.

Rivalry | Romance | Marriage | Affairs | Sex | Love | Couples | Students
This product is made-on-demand by the manufacturer using DVD-R recordable media. Almost all DVD players can play DVD-Rs (except for some older models made before 2000) - please consult your owner's manual for formats compatible with your player. These DVD-Rs may not play on all computers or DVD player/recorders. To address this, the manufacturer recommends viewing this product on a DVD player that does not have recording capability.

I Can Get It for You Wholesale
$19
Add to Cart