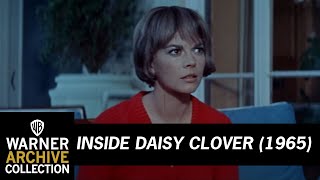 When teenage beachnik Daisy Clover (Natalie Wood) is discovered by a Hollywood studio, she has no idea how much her life is about to change. Daisy instantly becomes a big movie star, going from rags to riches and enjoying such perks as Hollywood parties and a romance with a handsome actor. But with stardom comes turmoil in the form of career pressures, personal problems, and a disastrous marriage. Soon it all becomes too much for the actress, and less than two years after becoming famous, Daisy has a nervous breakdown. Will Daisy rebound from her emotional collapse and stay in Hollywood' Or will she rethink her life and leave Tinseltown for good' A successful child actor herself, Natalie Wood brings genuine feeling and depth of experience to Daisy Clover, a character modeled on such 1930s and '40s stars as Shirley Temple and Elizabeth Taylor. Roddy McDowall, another child star of the '40s, is featured, and Robert Redford, in one of his first roles, plays the Hollywood heartthrob a few years before he acquired that status in real life.

New
This Property is Condemned
$14.50
Add to Cart