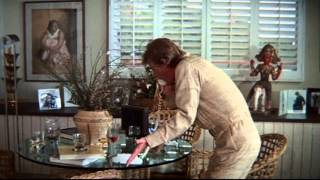 Based on his near-career-ending experience with the box-office disaster DARLING LILI, Blake Edwards fashioned a corrosive behind-the-scenes satire of the business in which he had long plied his trade.The film stars Richard Mulligan as Felix Farmer, a once-successful director whose career is on the slide because of the colossal failure of his $30 million G-rated musical. In desperation he hatches a plan to revive his career: Buy back the film and remake it, adding new pornographic footage to render it a more marketable box-office commodity. He believes that the key to the film's success will be the willingness of his ex-wife, Sally Miles (Julie Andrews), to dispense with her sweetly wholesome image and bare her breasts onscreen. To reach his goal, Farmer has to wade through a river of egomanical producers, wildly pretentious directors, knife-wielding industry gossips, sneaky editors, and even a dissipated doctor--or quack, as he prefers to be called. A broad, hugely entertaining attack on the hand that fed him, Edwards's film is among his best, with hilarious scenery chewing by William Holden (in his final film appearance), Loretta Swit, Larry Hagman, Richard Mulligan, Robert Preston, Robert Vaughn, Robert Webber, Robert Loggia, and no other Roberts among its seeming cast of thousands.

Racy | Satire | Theatrical Release | Naked Women | Film Directors
This product is made-on-demand by the manufacturer using DVD-R recordable media. Almost all DVD players can play DVD-Rs (except for some older models made before 2000) - please consult your owner's manual for formats compatible with your player. These DVD-Rs may not play on all computers or DVD player/recorders. To address this, the manufacturer recommends viewing this product on a DVD player that does not have recording capability.