Under the Rainbow PG

Who knew so many little people would throw such a huge party? 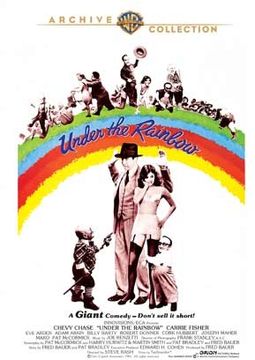 It was the largest gathering of little people ever, drawn from all over to appear in the movie of a classic children's story. They weren't in Kansas anymore. They were in Hollywood, home of wide-open lifestyles and nonstop parties.

This colorful screwball comedy uses the premise of 150 little people playing The Wizard of Oz's Munchkins housed in one Culver City hotel - and indulging in some high-energy partying - to spin zany screen mayhem with touches of romance (between G-man Chevy Chase and casting maven Carrie Fisher) and cockeyed espionage (involving German agent Billy Barty and Japanese spy Mako). Co-stars Eve Arden, Adam Arkin, Joseph Maher and Pat McCormick deliver tall orders of laughter, while smashing into small-fry shenanigans at every turn. There's no place like... Under the Rainbow.

When Gestapo and Secret Service Agents, 150 midgets (extras for "The Wizard of Oz") and a Japanese camera club converge on a California hotel, the predictable result is total chaos. A real dud at the box office.

Action | Spies | Theatrical Release
This product is made-on-demand by the manufacturer using DVD-R recordable media. Almost all DVD players can play DVD-Rs (except for some older models made before 2000) - please consult your owner's manual for formats compatible with your player. These DVD-Rs may not play on all computers or DVD player/recorders. To address this, the manufacturer recommends viewing this product on a DVD player that does not have recording capability.

50%off
The Incredible Shrinking Woman
$4.98 on Sale
Add to Cart