Out-of-work singer Julie Andrews conspires with Robert Preston to pose as a female impersonator in order to get work on the Paris cabaret circuit. 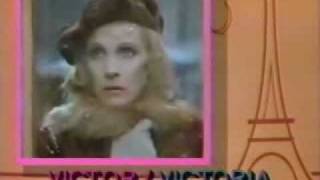 A man impersonating a woman on stage? Piece of cake. But a woman whose livelihood depends on pretending to be a man who pretends to be a woman? Now you've got problems! You've also got laughs when Julie Andrews plays Victor and Victoria in this clever delight, from filmmaker Blake Edwards, boasting a marvelous Academy Award-winning score by Henry Mancini and Leslie Bricusse.

Robert Preston plays a cabaret performer who devises the gender-bender stage act. Farcically complicating matters are James Garner as a mobster suspecting Victor is a Victoria and Lesley Ann Warren as a short-fused floozy.

Blake Edwards tones down the broadly farcical style that is his signature with this sly musical comedy starring Julie Andrews as British entertainer Victoria Grant. She and an older friend, gay impresario Toddy (Robert Preston), are close to starvation in 1930s Paris. Desperate for work, he changes her image, introducing her to the cabaret world as Polish female impersonator Victor/Victoria. Victoria, now a woman pretending to be a man in drag, becomes a huge success in the nightclub world. Chicago gangster King Marchan (James Garner) becomes especially intrigued by Victor/Victoria while visiting Paris with his dim-witted girlfriend, Norma (Lesley Anne Warren), and his ever-faithful bodyguard, Squash (Alex Karras), who's more than a little concerned by his boss's interest in a transvestite. As Marchan tries to get to the source of his attraction to the entertainer, trying to uncover the truth behind the rhinestone headdress, the farce commences, and the meaning of gender and sexual preference comes into question for all the characters. A director who often shows a willingness to let the seams in his work show for comic effect, Edwards has opted for stylish smoothness here while opening himself to questions of gender that his earlier films had anxiously mocked. Robert Preston steals the film as Victoria's graceful Svengali.

A down-and-out female singer takes a job as a female impersonator and to her surprise becomes the toast of Paris cabarets in the 1930s, delighting her gay mentor and confusing an American admirer. Academy Award Nominations: 7, including Best (Adapted) Screenplay, Best Actress--Julie Andrews. Academy Awards: Best Original Song Score.

Action | Classic | Gay / Lesbian | Scams And Cons | Switching Roles | Recommended | Showbiz | Theatrical Release | Musicals / Music Videos | Essential Cinema
This product is made-on-demand by the manufacturer using DVD-R recordable media. Almost all DVD players can play DVD-Rs (except for some older models made before 2000) - please consult your owner's manual for formats compatible with your player. These DVD-Rs may not play on all computers or DVD player/recorders. To address this, the manufacturer recommends viewing this product on a DVD player that does not have recording capability.