On the rebound from a broken heart, a writer marries another woman, but secretly longs for his former love. 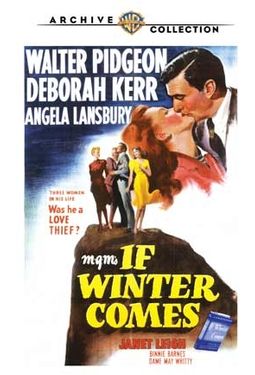 On the rebound from a broken heart, a writer (Walter Pidgeon) marries another woman (Angela Lansbury), but secretly longs for his former love (Deborah Kerr). His life takes an unexpected turn when she returns, hoping to rekindle their relationship. With England on the brink of war, he finds even more trouble at the office when he is falsely accused of having an affair with a young, pregnant coworker (Janet Leigh), leading to further tumult and tragedy.

In this drama, set in England, an honorable textbook writer in a village becomes friends with a pregnant girl. The friendship costs him his marriage. Later, the girl dies, and the authorities wonder if it is murder. A coroner's inquest is held, and for a while the writer's social and professional standing sets on the brink of ruin. In the end, he is finally cleared and is therefore free to court his true love.

Death | Justice | Romance | Crime | Small Towns | Friendships | Romances | Love
This product is made-on-demand by the manufacturer using DVD-R recordable media. Almost all DVD players can play DVD-Rs (except for some older models made before 2000) - please consult your owner's manual for formats compatible with your player. These DVD-Rs may not play on all computers or DVD player/recorders. To address this, the manufacturer recommends viewing this product on a DVD player that does not have recording capability.