Cary Grant as an executive who leaves his overly-ambitious wife to marry the exotic daughter of a sheik who is trained in the art of pleasing a man. 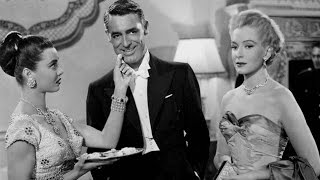 Clemson Reade (Cary Grant) is the kind of man who wants to marry an old-fashioned girl, one who will stay home and take care of her husband. However, he's fallen in love with Priscilla "Effie" Effington (Deborah Kerr), who has an exciting career with the State Department that she has no intention of giving up. Clemson has the poor timing of proposing marriage to Effie just as she's in the middle of trying to resolve a major political crisis with the Middle Eastern nation of Bukistan; the United States wants to stay on Bukistan's good side, thanks to their plentiful reserves of oil. Tired of waiting for Effie, Clemson decides that he needs to find a potential bride who will follow his lead instead of her own, and he soon meets Princess Tarji (Betta Saint John), daughter of the King of Bukistan, who has spent her life learning to faithfully serve her man. Clemson half-seriously sends a telegram proposing marriage to Tarji, which touches off a political tempest in a teapot when Tarji responds by visiting the United States. The State Department decides that someone should look after Tarji while she's in America, and who should be given the assignment but Effie; to Clemson's chagrin, Effie uses her time with Tarji to enlighten her about the more liberated status of women in the West. By the way, don't bother looking for Bukistan in your atlas, the country doesn't really exist.

Romance | Love Triangle | Romantic Comedy | Weddings | Love Triangles | Love
This product is made-on-demand by the manufacturer using DVD-R recordable media. Almost all DVD players can play DVD-Rs (except for some older models made before 2000) - please consult your owner's manual for formats compatible with your player. These DVD-Rs may not play on all computers or DVD player/recorders. To address this, the manufacturer recommends viewing this product on a DVD player that does not have recording capability.