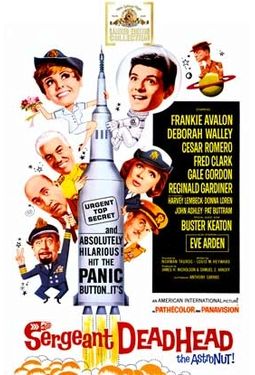 In this comedy, a hapless Army sergeant's plans to marry are temporarily delayed after he accidentally ends up launched into space with a chimpanzee. Upon his return, he is a changed man and is ultimately sent to prison after he threatens to go public with the mix-up. Meanwhile, suave Sgt. Donovan, Deadhead's double, takes his place at the altar. To stop him, Deadhead breaks out of prison and becomes his old self again just as he arrives at the honeymoon suite. Naturally he wins his rightful bride and happiness ensues.

Space
This product is made-on-demand by the manufacturer using DVD-R recordable media. Almost all DVD players can play DVD-Rs (except for some older models made before 2000) - please consult your owner's manual for formats compatible with your player. These DVD-Rs may not play on all computers or DVD player/recorders. To address this, the manufacturer recommends viewing this product on a DVD player that does not have recording capability.