Hungry for Adventure...Burning to Fight! 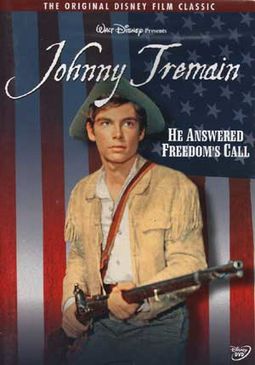 Return to the days that sparked the American Revolution, now on Disney DVD for the first time! Meet young Johnny Tremain, a silversmith's apprentice with dreams of learning the trade and making his own way. When a terrible injury ends his hopes, he joins the emerging Sons Of Liberty. The Redcoats are coming as you journey back to the Boston Tea Party, the midnight ride of Paul Revere, and Lexington Green, where tyranny was vanquished by an idea - freedom for all! Based on the classic novel by Esther Forbes - you won't want to miss one historic moment of Disney's classic adventure and liberty's rising light.

Based on the classic young adult novel by Esther Forbes, JOHNNY TREMAIN is both educational and entertaining. Johnny is a young and eager silversmith's apprentice in the colonial period who must find another job after an accident maims his hand. But before he can, he is swept into the struggle for independence, becoming a first-hand witness to the major events leading up to the Revolutionary War. He takes part in the Boston Tea Party, and soon afterward fights in the initial battles at Lexington and Concord, meeting such luminaries as Sam Adams and Paul Revere. JOHNNY TREMAIN explores the efforts that gained America independence through the eyes of a young man, thereby becoming an exciting and edifying look at that important historical period.