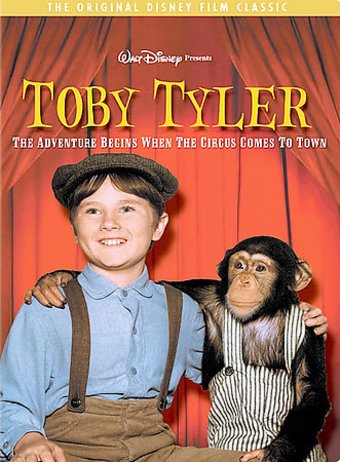 Angered at his stern uncle, Toby Tyler (Kevin Cocoran) runs away from his foster home to join the circus, where he soon befriends Mr. Stubbs, the frisky chimpanzee. However, the circus isn't all fun and games when the evil candy vendor, Harry Tupper (Bob Sweeney), convinces Toby that his foster parents don't love him or want him back. Toby resigns himself to circus life, but when he finally realizes that Tupper lied to him, and that his foster parents truly love him, Toby happily returns home once again. The scenes of Toby training his horse are especially enjoyable, as is his comic interaction with the chimp. Director Charles Barton serves this light and tender turn of the century drama up with humorous ease. Look for a great cameo from Barbara Beaird as the outspoken Mademoiselle Jeanette. The fanciful screenplay by Lillie Hayward and Bill Walsh is based on the children's novel by James Otis Kaler.

Toby Tyler
TOBY TYLER takes you back in time to when the day the circus came to town was the biggest day of the year! Now on Disney DVD, Kevin Corcoran stars as the lovable, determined runaway who believes his uncle and aunt no longer want him, and life under the Big Top will put things right. Along the way he meets Ben, Mr. Tupper, and the mischievous Mr. Stubbs -- a playful chimpanzee! Together they fall into hilarious jams and scams more fun than a barrel of monkeys. Get your peanuts, popcorn, and candied apples, and jump into a classic three-ring circus that will have the whole family in stitches!

15%off
The Adventures of Huckleberry Finn
$11.10
Add to Cart

16%off
Those Calloways
$8.40 Super Savings
Add to Cart

22%off
Adventures of Bullwhip Griffin
$11.70 Super Savings
Add to Cart