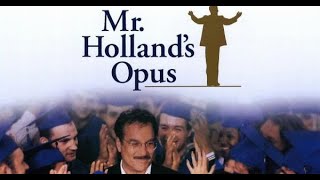 Richard Dreyfus stars as an aspiring composer who becomes a terrific music teacher in spite of himself. The story chronicles thirty years in the inspirational life of a man who, through his sheer love of music, leaves an unexpected, indelible mark on the lives of his students. Academy Award Nominations: Best Actor--Richard Dreyfuss.

Mr. Holland's Opus
Acclaimed star Richard Dreyfuss gives the performance of a lifetime (1995 Academy Award(R)-nominee, Best Actor -- MR. HOLLAND'S OPUS) in this uplifting hit cheered by audiences everywhere! Glenn Holland (Dreyfuss) is a passionate musician who dreams of composing one truly memorable piece of music. But reality intrudes when he reluctantly accepts a "day job" as a high school music teacher to support his family. In time, however, Mr. Holland realizes that his real passion is teaching, and his legacy is the generations of young people he inspires. Also featuring Glenne Headly (BREAKFAST OF CHAMPIONS) and Olympia Dukakis (MAFIA!) -- you're sure to find this electrifying motion picture both entertaining ... and unforgettable!

The year is 1965, and Glenn Holland, a composer convinced he is destined to write an historic opus, takes a job as a music teacher to pay the bills. Unbeknownst to him, it is the next 30 years, spent as an instructor, that will define his life. His passionate teaching motivates and even changes a number of his students. However, Holland suffers a tragedy in his personal life: his young son Cole is deaf, and thus unable to fully appreciate the joys of music. As a result, Holland concentrates more on his students than on his own child. But when Holland finally realizes the extent of his neglect, thanks to his wife and Cole himself, the teacher must learn to accept his son's handicap, and give him the love and guidance he deserves.