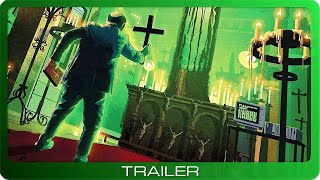 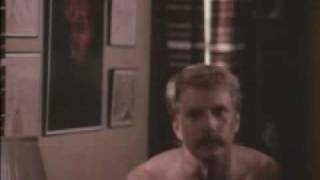 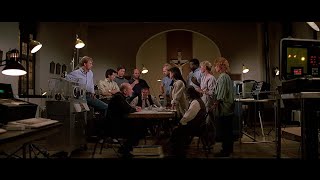 "I've got a message for you, and you're not going to like it: Pray for death."
- Wyndham (Robert Grasmere), as he is devoured by a swarm of bugs

Director John Carpenter creates a film that is genuinely scary with PRINCE OF DARKNESS. Graduate students are confronted with pure evil when they go to study a container of strange ooze discovered in the basement of an abandoned church. The ooze is released and all hell, quite literally, breaks loose within the church. Some of the students are turned into skinless zombies while others receive warnings from the future sent in the form of hazy dreams. The warnings tell of the rise of Satan and the ensuing destruction of humanity. The students must stop the evil from being released, even at the cost of their lives and souls. Carpenter pulls together a solid ensemble cast and builds a heavy mood of impending doom around them. There are many truly terrifying moments, with the climax of the film being one of the most visually brilliant and disturbing in the horror genre. Rock star Alice Cooper provides a fun cameo appearance as a minion of Satan. PRINCE OF DARKNESS was the first production in a three-film deal Carpenter signed with a small Hollywood studio in the 1980s and is one of the great films of the director's canon. The other two films in that deal were THEY LIVE and MEMOIRS OF AN INVISIBLE MAN.

When a group of students and scientists discover an ancient cannister of liquid in an abandoned church, the liquid tranforms them into zombies controlled by Satan.

70%off
Village of the Damned
$2.99 Super Savings
Add to Cart

17%off
The Serpent and the Rainbow
$12.50 Super Savings
Add to Cart