The Serpent and the Rainbow R

37K ratings
Currently Out of Stock: We'll get more as soon as possible
Notify Me When Available
Add to Wishlist
Format:  DVD
item number:  F66G
Different formats available:
The Serpent and the Rainbow (Blu-ray) for $30.70
More products that might interest you:
Classic Horror Collection: 20 Full Color Vintage Movie Postcards (Movie Collectible) $4.78
91% recommend us! 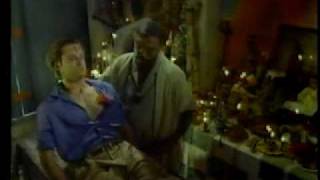 The Serpent and the Rainbow 1988 TV trailer

The real-life story of a Harvard anthropologist who takes an assignment from a rich pharmaceutical firm to investigate a "miracle" drug found in a well-established religion in Haiti, "voodoo." He soon finds the local fascist police force has taken as much interest in his findings as has the drug firm. From the book by Wade Davis.

Dennis Alan heads to Haiti in hopes of obtaining a mysterious potion that represses the nervous and respiratory systems without causing death; this draught would also scientifically explain the myth of the zombie. Once on Caribbean soil, however, Alan encounters powerful cults, government corruption and a poverty-stricken populace ready to revolt -- and he finds himself deeply seduced by voodoo, though his sense of logic cannot comprehend its mystical nature. But more earthly dangers lurk in the form of an evil magistrate and the local police, who do not hesitate to torture Alan when he defies their leader. In the end, Alan emerges from the experience radically changed, with the realization that Western notions of science cannot explain the many things he's witnessed in this world.