He's arrived in the St. Nick of time! 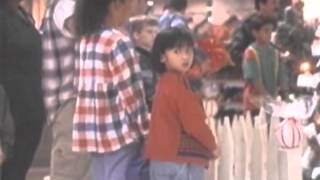 A conk on the melon leaves an eccentric millionaire with the false impression that he's Saint Nicholas...except this Santa's no jolly fat guy with a belly like a bowl full of jelly! He's ripped and ready to rumble! And he knows who's been naughty--like an evil villain out to rob the town of all its good cheer.

When muscular, miserly millionaire Blake Thorne is struck on the head while wearing a Santa Claus suit, he awakens with amnesia -- and believes that he's actually Kris Kringle! And this strapping Santa is going to need his brute strength for more than just carrying a sack filled with gifts. Why' Because the aptly-named Frost, an evil mad scientist, wants his goons to evict the residents of an orphanage. Can this guardian angel save the kids from homelessness during the holiday season'

Jingle All The Way
$5.80 Super Savings
Add to Cart