Love actually is all around.

32M ratings
Out of Print: Future availability is unknown
Notify Me When Available
Add to Wishlist
Format:  DVD
item number:  6469Q
Also released as:
Love Actually (Blu-ray) for $12.50
91% recommend us! 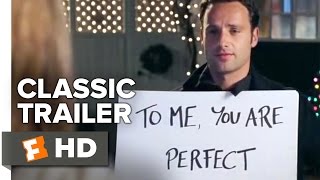 Written and directed by Richard Curtis and produced by Duncan Kenworthy (the team behind NOTTING HILL and FOUR WEDDINGS AND A FUNERAL) this zingy British comedy weaves a vivid crazy quilt of interlocking or unrelated vignettes all dealing with the subject of love over the Christmas holidays in London. The big name cast includes Hugh Grant as a prime minister who falls for a staff member, Liam Neeson as a widower counseling his son in the ways of romance, Laura Linney as a shy woman working up the nerve to ask out a coworker, Emma Thompson and Alan Rickman as a couple faced with infidelity, and Colin Firth as a writer who falls for his Portuguese maid. Additionally, a pair of porn film stand-ins bond on the set, an artist fantasizes about his friend's wife; and perhaps funniest of all, an aging rock star (Bill Nighy) tries for his comeback with a Christmas novelty song. The likes of Billy Bob Thornton, Rowan Atkinson and Denise Richards turn in cameos, helping making this film a throwback to those all-star, multi-plotted comedies of the 1960s and '70s, such as IT'S A MAD MAD MAD MAD WORLD (1963), NASHVILLE (1975), and CALIFORNIA SUITE (1978). With Curtis' comedic credentials and the star wattage of pros like Grant, Neeson and Thompson, LOVE, ACTUALLY is a laugh-packed affair, with more than a few tears to be shed along the way, and a startling amount of bawdy raunchiness.

16%off
Monty Python's The Meaning of Life
$8.40 Super Savings
Add to Cart

43%off
Peppermint Candy Tree - Edible Ornament TOP 100 Bestseller
$3.98 Out of Stock
Save for Later