675K ratings
Currently Out of Stock: We'll get more as soon as possible
Notify Me When Available
Add to Wishlist
Format:  DVD
sku:  36EGV
Also released as:
Inside Man (Blu-ray + DVD) for $11.98
Our customers love us! 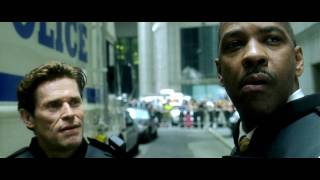 His time as a director may have seen Spike Lee gently creep away from the controversial material that made his name, but he hasn't lost his eye for creating an entertaining spectacle; INSIDE MAN is a deliriously constructed crime caper designed to keep audiences guessing right up until the final moments. The plot, written by Russell Gewirtz, works from a devilishly simple premise and spins off on a number of interesting and creative tangents. Detective Keith Frazier (Denzel Washington) and his partner Bill Mitchell (Chiwetel Ejiofor) are sent to deal with a hostage situation at a bank in lower Manhattan. Dalton Russell (Clive Owen) is a masked man holding a number of people hostage in the bank while its chairman, Arthur Case (Christopher Plummer), worries about a secret document he has hidden in a safety deposit box in the vaults. Madeline White (Jodie Foster) is a sassy power broker who Case hires to enter the melee in order to get his mysterious object out of the box and out of the bank.

As Gewirtz gradually confounds viewers' expectations by threading neat twists and turns into the plot, Lee briefly--perhaps too briefly for hardened Spike fans--returns to the racial themes he overtly tackled in his earlier work. The director uses a number of visual tricks to keep the action humming, such as spectacular overhead shots and grainy, darkly hued posthumous interview clips with the hostages, but INSIDE MAN is essentially a fun popcorn movie executed with an intelligence usually lacking in the genre. While many of the themes--cops are racist, people in power are corrupt, the innocent are persecuted--may be hackneyed, it's testament to Lee's stature as a filmmaker that he manages to pull an engrossing and enjoyable romp from such ostensibly standard subject matter.

25%off
Beast From Haunted Cave
$5.95 Spring Sale
Add to Cart

26%off
The Great Diamond Robbery
$9.60 Spring Sale
Add to Cart