Anything can happen during the dog days of summer. On August 22nd, 1972, everything did 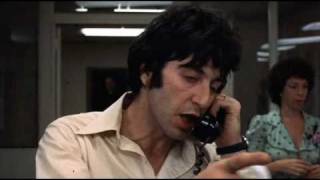 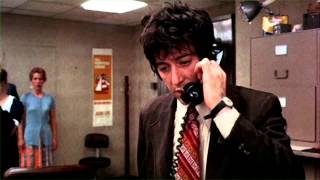 "He wants to know when you'll be through."
- Jenny (Carol Kane), repeating to Sonny (Al Pacino) what her husband is asking her on the phone as he's robbing the bank
"No, I don't want to be paid, I don't need to be paid. Look, I'm here with my partner and nine other people, see. And we're dying, man. You know' You're going to see our brains on the sidewalk, they're going to spill our guts out. Now, are you going to show that on television' Have all your housewives look at that' Instead of AS THE WORLD TURNS' I mean, what do you got for me' I want something for that."
- Sonny
"Attica! Attica!"
- Sonny to the crowds outside the bank

On a hot Brooklyn afternoon, two optimistic nobodies set out to rob a bank. Sonny (Al Pacino) is the mastermind, Sal (John Cazale) is the follower and disaster is the result. Because the cops, crowds, TV cameras and even the pizza man have arrived.

Al Pacino and director Sidney Lumet (collaborators on Serpico) reteam for this boisterous comedy thriller that earned six Academy Award nominations (including Best Picture) and won an Oscar for Frank Pierson's streetwise screenplay. Based on a true incident, Dog Day Afternoon "is one of the big ones, swarming with energy, excitement and drama." (Gene Shalit, Today/NBC-TV).

Al Pacino plays a ferocious and fed-up bank robber in Lumet's classic film DOG DAY AFTERNOON. Balancing suspense, violence, and humor, the film's depiction of a grand-scale media event craftily dives from the political to the personal, evoking a piercing portrait of a man and his devastating downward tumble as seen through the media circus that Lumet made a career of chronicling. Pacino is heartbreakingly real as Sonny, a smart yet self-destructive Brooklyn tough whose plan to rob the local bank to fund his male lover's (Chris Sarandon) sex change goes absurdly wrong. Accompanied only by his doltish accomplice, Sal (John Cazale), Sonny realizes that all the money had been removed before his arrival, and decides to kidnap a handful of bank employees instead. As the lengthy August day drags on, Sonny and hordes of local police, led by Sergeant Moretti (Charles Durning), make little progress, and eventually Sonny's wife and lover are brought to the scene. The crowd's sympathy is immediately captured by the charismatic Sonny, whose antagonism with the police is played out before an audience of millions, leading to an inevitably tragic finish.