So full of spectacle and glory it had to be made in Technicolor! 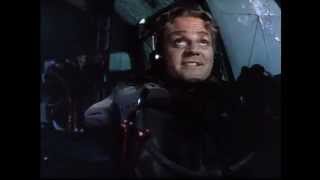 Captains of the Clouds - Theatrical Trailer

A better-than-average WWII flagwaver, CAPTAIN OF THE CLOUDS is told from the point of view of the Canadians. James Cagney and his daredevil flying buddies enlist in the Royal Canadian Air Force thinking that years of dangerous aerial feats have acquainted them with mid-air derring-do. The brash leader gets stuck with a civilian air convoy, but matures quickly when faced with a heroic decision.

In the early days of North American involvement in the Second World War, a small group of Canadian freight pilots hear the call to arms.
Led by MacLean, a brawny and big-mouthed aviator, the men enlist in the Royal Canadian Air Force. Unfortunately for MacLean, the R.C.A.F. brass feel he is too old to fly a military aircraft. So his chums get their wings, and he gets stuck with a civilian detail ferrying his pals' bomber squadron to England.
MacLean's heroism eventually has a chance to surface; however, when a German fighter plane attacks his squadron, he takes a chance and crashes into the German ship. This saves the lives of his pals and opens up the Atlantic corridor for North America to follow the Allies into battle.

67%off
Pink Floyd
Classic Albums: The Making of The Dark Side of the Moon (DVD)
$3.98 on Sale
Add to Cart

50%off
Superman Super-Villains: Metallo
$4.98 on Sale
Add to Cart