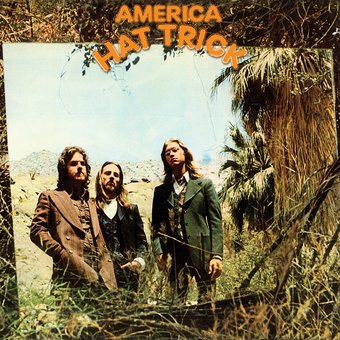 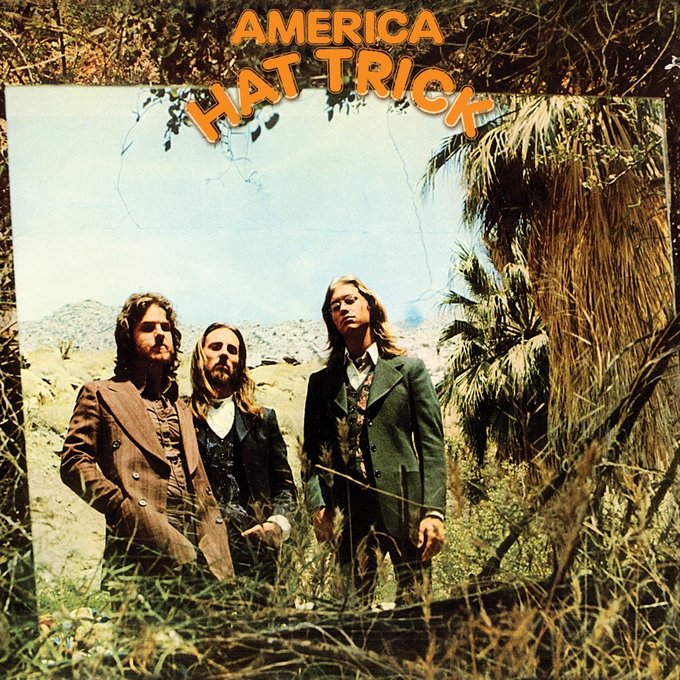 When originally released in 1973, "Hat Trick" hit #28 on the Billboard Pop Albums chart. The single "Muskrat Love" (the first song on an America album that wasn't written by the band) hit #67 on the Billboard Pop Singles chart (it became a Top Five hit for Captain & Tennille a few years later). Joe Walsh (The Eagles) also contributes guitar chops to the track "Green Monkey."

America: Dan Peek, Dewey Bunnell, Gerry Beckley.
Additional personnel: Joe Walsh (guitar); Henry Diltz (banjo); Tom Scott (saxophone); David Dickey (bass guitar); Hal Blaine (drums, percussion); Chester McCrackin (congas).
America's Hat Trick has the distinction of being the album that contained the first song that the band sang that wasn't theirs. Written by Willis Ramsey, the syrupy "Muskrat Love" only went as high as number 67 on the singles chart for America, but the Captain & Tennille managed to take it all the way to number four only three years later. The rest of Hat Trick failed to garner any hits and is a slight disappointment after the success of their self-titled debut in 1972, which harbored the band's first number one hit in "A Horse With No Name," and after Homecoming, their satisfying follow-up. Hat Trick peaked at number 28 on the album charts, faltering mainly because the songs lacked the cordial folk-rock melodies and mindful songwriting that prevailed on the earlier releases. "She's Gonna Let You Down" and "Rainbow Song" are the album's best cuts, but banal offerings such as "Green Monkey," "Willow Tree Lullaby," and "Molten Love" have Bunnell and Peek straying off course, sounding stale and musically feeble. The unsuccessful repercussions that evolved from Hat Trick both commercially and otherwise were not overlooked by the band, and they rebounded with 1974's Holiday, an album which yielded hits in "Tin Man" and "Lonely People," which both made Billboard's Top Five. ~ Mike DeGagne