A Father - A Son - A Revolution 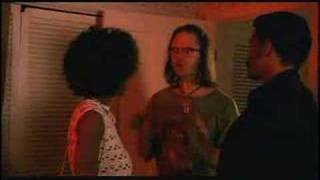 In the spirit of his legendary father Melvin, Mario Van Peebles directs BAADASSSSS!, a docudrama about the making of the notorious SWEET SWEETBACK'S BAADASSSSS SONG. In 1971, when he was on the verge of becoming one of the first major black Hollywood directors, Melvin opted to take a risk, go against audience expectations, and shoot a controversial film instead. He wound up making one of the first truly "independent" motion pictures. Mario's faux documentary revisits this time and place, charting the tumultuous journey of that film's production. Stepping into the tight jeans, boots, and moustache of his father, Mario is joined by Ossie Davis, Saul Rubinek, Paul Rodriguez, Rainn Wilson, and Khleo Thomas--who plays the adolescent Mario. After an incredibly taxing production in which members of the crew were arrested and a desperate Melvin had to borrow money from Bill Cosby (T.K. Carter), he was forced to distribute the film on his own, opening it on one screen in Detroit. A lackluster matinee had him worried, but by that night, the line outside the theater was around the block and a sensation had begun. Mario's reverence both for his father, and for the material, shines through in every moment of BAADASSSSS!, resulting in a film that is as much a celebration of family as it is an ode to the craft of cinema itself.

Classified X: The Representation of African Americans in...
$3.98 on Sale
Add to Cart

How to Eat Your Watermelon in White Company (and Enjoy It)
$13.50 Super Savings
Add to Cart