Dr. Don Jardian. Age: 29. Surgeon. Drafted. Vietnam. Nothing could have prepared him for the danger. 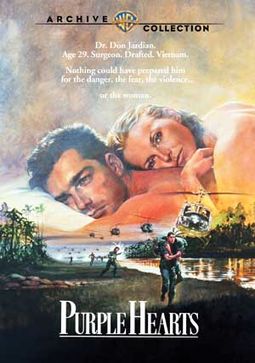 In the carnage and cruelty of Vietnam, Navy surgeon Don Jardian learned he had to move fast to deal with black marketeers who control vital supplies - and even faster to stitch together a shrapnel-riddled combatant. But he couldn't foresee the emotional crossfire he and nurse Deborah Solomon experience as their romance - and the war's dangers - heighten.

Ken Wahl (Wiseguy) and Cheryl Ladd (Charlie's Angels) star in director Sidney J. Furie's vivid and moving Purple Hearts, a Vietnam War drama of love and courage showcasing fine performances and authentic Philippines-filmed recreations of the hell-on-earth that was Vietnam. In love and war, their story makes for an exciting powerful film about a conflict in which there were no easy answers.

A Navy surgeon and a nurse fall in love while serving in Vietnam during the war. Their affection for one another provides a striking contrast to the violence of warfare.

The Boys in Company C
$23.10 Super Savings
Add to Cart