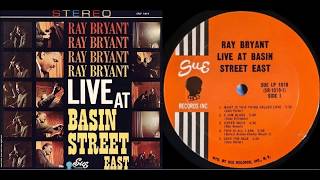 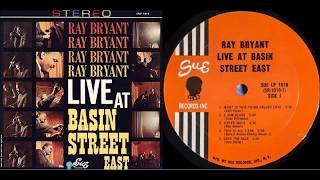 Personnel includes: Ray Bryant (piano).
Includes liner notes by Ren Grevatt.
Personnel: Ray Bryant (piano); Ben Riley (drums).
Liner Note Author: Ren Grevatt.
Recording information: Basin Street East, New York, NY (1964).
Ray Bryant's second album for Sue was the one of two releases taped during an engagement at Basin Street East in New York City in 1964. The pianist is joined by bassist Jimmy Rowser and drummer Ben Riley (neither of whom is credited on the album jacket). This LP concentrates primarily on standards, although one pop song of the period (Bob Dylan's "Blowin' in the Wind") is thrown in, along with a pair of Bryant's originals. The piano is in decent shape, though Bryant is fairly conservative in his approach to most of the tunes, resulting in a somewhat uninspired treatment of "C Jam Blues" and a funky but lackluster "Love for Sale." One of his more unusual choices is organist Wild Bill Davis' "Blues Azure" (also known as "Azure Te," as it was titled when Duke Ellington performed it between 1969 and 1971 with its composer in his orchestra). The audience, for the most part, seems more interested in talking among themselves than realizing they are witnessing the making of a live recording. Long unavailable following the demise of the label, this music was reissued on CD by Collectables in 1996. ~ Ken Dryden

60%off
Ray Bryant
Madison Time With A Hollywood Jazz Beat (CD)
$5.98 on Sale
Add to Cart