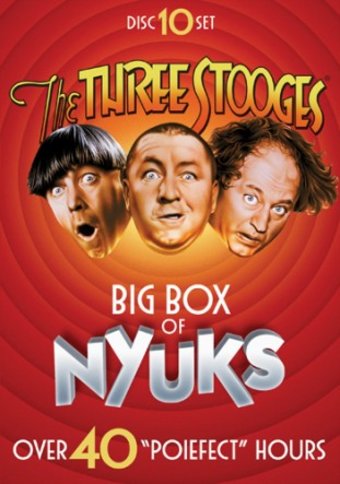 • The Three Stooges - The Complete Animated Series - THE NEW THREE STOOGES premiered in 1965 and featured animated cartoons with the voices of the Stooges - Larry, Moe and Curly Joe - as well as real footage 'wraparounds' of the three comedy greats performing short skits to accompany the cartoons. Featuring all 156 cartoons, plus all 40 live action sequences exactly as they originally aired.

• The Three Stooges - Hey Moe, Hey Dad! - The most expansive documentary ever done about the six men who comprised the iconic comedy team The Three Stooges. This prodigious achievement is narrated by Moe Howard's son Paul, and features his sister Joan Howard Maurer along with various other Stooge relatives. It offers us a touching, warmhearted look back at the long history of this team with rare personal pictures, many never seen by the public before.

• The Three Stooges (TV Movie - 2000) - Based on the book The Three Stooges: From Amalgamated Morons to American Icons, this MOW dramatizes the rise of the comedy trio to worldwide fame. Starring Michael Chiklis, Paul Ben-Victor, John Kassir, Evan Handler

60%off
The Three Stooges - Greatest Routines
$3.98 on Sale
Add to Cart

Classic Shorts from the Dream Factory, Volume 3
$20
Add to Cart