It's the story of a man, a woman, and a rabbit in a triangle of trouble. 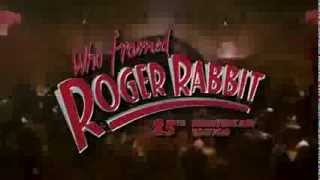 "I'm not so bad. I'm just drawn that way." -- Voice of Kathleen Turner (Jessica Rabbit).
"Do you mean to tell me you could've taken your hand out of that cuff at any time'" -- Bob Hoskins (Eddie Valiant)
"No, not any time only when it was funny."
- Voice of Charles Fleischer (Roger Rabbit)

Someone is out to steal "Toon Town" from cartoon characters -- and to get their hands on the valuable property, they have framed its biggest cartoon star for murder. Detective Eddie Valiant comes out of self-enforced "retirement" to solve the case and save the toons in this technically magnificent film. Academy Award Nominations: 4. Academy Awards: Best Visual Effects, Best Sound Effects Editing.

The time is Hollywood in its heyday, and cartoons are king. But falling star Roger Rabbit's about lose his place as ruler of the empire. Distracted by his wife's alleged infidelities, Roger is one falling anvil away from being fired -- and studio head R.K. Maroon wouldn't mind hastening the process. So the befuddled bunny hires down-and-out detective Eddie Valiant to help him get back the sultry, bosomy Jessica Rabbit. At first Valiant refuses -- he's got his own reasons for hating the 'toons. But when the studio tycoon Maroon is found dead, Roger's one marked rabbit. So Valiant ignores his better judgment and tries to save the harassed hare from a nefarious Judge just aching to terminate him. For Roger's sake, he ventures into a dangerous and tempting space, the place where anything can happen and imagination rules... the magical, maniacal 'Toontown.

Looney Tunes: Back in Action
$5.98 on Sale
Add to Cart