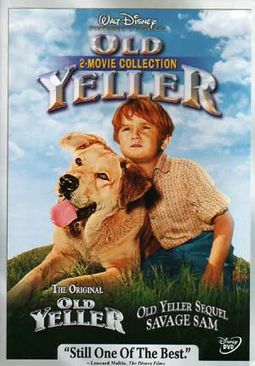 Old Yeller: Walt Disney's first and quintessential film about a boy's love for his dog is now an American original as much as it is a Disney classic. No film better portrays the powerful emotions of hope, courage and friendship.

When his younger brother adopts a frisky lop-eared stray, 15-year-old Travis (Tommy Kirk), acting "man-of-the-house," tries to shoo him away. But Old Yeller soon proves he is anything but "yellow" when he protects the family farm and saves Travis' life. From its charming simplicity to its gripping conclusion, the drama, humor and heart of Old Yeller belong in everyone's collection.

Savage Sam: Now discover what happens next in Savage Sam, the sequel to Walt Disney's classic adventure Old Yeller, where adopting a new pup sets the stage for more thrills in the untamed West.

With his two young masters Travis and Arliss Coates (Tommy Kirk, Kevin Corcoran), gentle and true-blue Sam faces even greater dangers than Yeller. From the ferocious attacks of wolves and wildcats to tracking renegade wrongdoers, our four-legged hero proves his pedigree. Savage Sam is a compelling story of love, devotion and trust that is sure to win your heart.

OLD YELLER is a heartfelt Walt Disney story of a poor 1860s Texas family and the wonderful dog who befriends them. At first, young Travis wants nothing to do with the stray. But Old Yeller quickly proves himself a loyal friend and the two become inseparable pals, sharing joyous experiences and learning valuable lessons.

SAVAGE SAM: In this sequel to OLD YELLER, the famous dog's offspring saves his masters from a group of Apache Indians. The intrepid canine must brave wolves and wildcats before accomplishing his task.

Far from Home: The Adventures of Yellow Dog
$6.60
Add to Cart

Adventures of the Wilderness Family Triple Feature (The...
$10
Add to Cart

The Incredible Journey
$10
Add to Cart

The Misadventures of Merlin Jones (DVD)
$10
Add to Cart