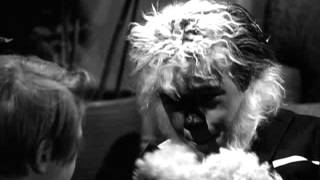 Filled with impossible situations and hilarious gags, this comic allegory follows the adventures of Wilby Daniels (Tommy Kirk) after he finds an ancient mysterious ring and unintentionally casts a hex on himself and turns into a huge sheepdog. The only other odd thing is that Wilby still has his voice intact. Back and forth he goes, constantly changing from the pooch to his human self. While this amuses his brother, it positively amazes his neighbors, the local police, and a brunette beauty on his street. As if his bad hair days weren't enough, Wilby soon learns that a group of spies has moved into the neighborhood. This initially bad news might turn into his chance to perform a final heroic act that could free him from the spell altogether. The resulting comedy is a well-tailored adolescent romp directed with great pacing by Charles Barton.

The Shaggy Dog (1959)
Wilby Daniels (Tommy Kirk) is just an ordinary teenager until a magical ring accidentally transforms him into a lumbering sheepdog ... whose owner is the leader of a plot to destroy the Space Program! This hilarious madcap adventure was the first live-action comedy Walt Disney produced, with a story full of slapstick chases, sight gags, hot rods, spies, and spells! Fred MacMurray helms an all-star cast including Jean Hagen, Tim Considine, Kevin Corcoran, and Annette Funicello in her big-screen debut. It's timeless, thoroughly entertaining fun for every two- (and four-) footed member of your family!