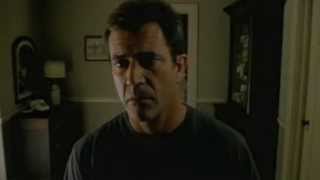 From M. Night Shyamalan, the writer/director of The Sixth Sense and Unbreakable, comes the story of the Hess family in Bucks County, Pennsylvania. One morning, they wake up to find a 500-foot crop circle in their backyard. Graham Hess (Mel Gibson) and his family are told extraterrestrials are responsible for the sign in their field. They watch the news as crop circles are soon found all over the world. Signs is the emotional story of one family on one farm as they encounter the possibility the world is being invaded.

It's contaminated. That's what pint-sized Bo (Abigail Breslin) says about every glass of water that she tries to drink, then rejects. This is just one in a long list of strange occurrences that are changing the lives of the Hess family. Things go awry when Graham Hess (Mel Gibson) and his brother, Merrill (Joaquin Phoenix), awake early one morning to find the dogs barking and the children--Bo, and her brother Morgan (Rory Culkin)--wandering bleary eyed in the corn fields. They discover a pattern of perfectly carved crop circles left the night before. Trying not to overreact, Graham ignores the media frenzy that has permeated all television and radio stations, and even shrugs off the oddly familiar information that Morgan reads in his book about extraterrestrials invading earth. The real challenge for Graham is to find the faith he needs to pull himself, and his family, through this unexplainable series of events. SIGNS is the long-anticipated film from writer-director M. Night Shyamalan (THE SIXTH SENSE, UNBREAKABLE), a suspenseful and uniquely chilling family story.