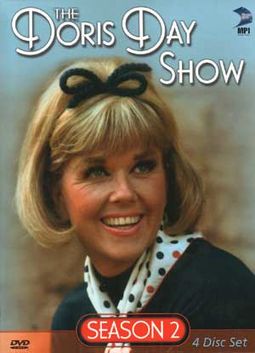 In the second year of The Doris Day Show, widow Doris Martin (Day) becomes a working mother, commuting to San Francisco from her family farm in the country to become executive assistant to a magazine editor, played by McLean Stevenson ("*M*A*S*H*"). Rose Marie ("The Dick Van Dyke Show") portrays the office secretary, Myrna Gibbons, who becomes Doris' friend and confidante.

The Doris Day Show, Season 2 contains all 26 remastered episodes from the 1969-70 season plus a wealth of rare and new bonus features.

America's sweetheart returned to the small screen in 1969, playing Doris Martin for a second season of her popular family sitcom. In the previous season, Doris moved to the country to raise her young sons on her father Buck's (Denver Pyle, DUKES OF HAZZARD) farm in Mill Valley, California, after the death of her husband. This season sees Doris taking a job at TODAY'S WORLD, a San Francisco-based magazine to which Doris commutes from the farm. Michael Nicholson (McLean Stevenson, M*A*S*H) is introduced as her editor, and Myrna Gibbons (Rose Marie, THE DICK VAN DYKE SHOW) is her coworker. Episodes include "The Chocolate Bar War," "Doris the Model," "You're as Old as You Feel," and "The Gas Station."