The movie with 20,000-mile or one-million-laughs guarantee! 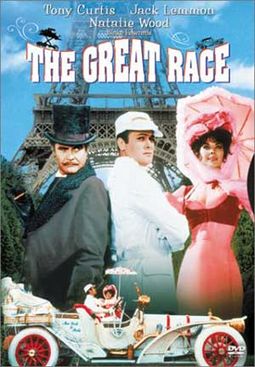 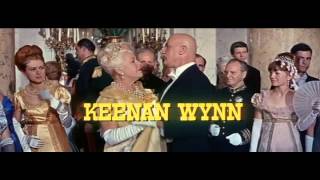 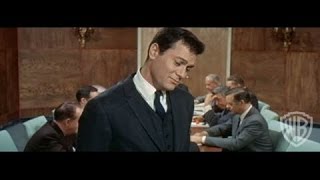 Crank your engines! With a roar, sputter and pop (and more Academy Award-winning Best Sound Effects), drivers wheel westward in wacky turn-of-the-century autos for a New York-to Paris race. Ahead lie 20,000 miles, a barroom brawl, a sinking iceberg, 2,357 pies in the face and incalculable laughs.

Blake Edwards turns a marvelous cast loose on a round-the-world highway booby-trapped by some of the funniest screen gags ever. Jack Lemmon and Peter Falk are nasty Professor Fate and his dim henchman Max. Tony Curtis is their good-guy nemesis, the Great Leslie. And Natalie Wood is cheroot-puffing suffragette reporter Maggie DuBois. Zestily scored by Henry Mancini and ravishing in a new digital transfer with revitalized digital audio from restored elements, The Great Race is great fun!

A tribute to masters of slapstick Laurel and Hardy, Blake Edwards's spectacular farce stars Jack Lemmon, Tony Curtis, and Natalie Wood. In 1908 New York, the evil, black-clad Professor Fate (Lemmon) challenges the Great Leslie (Curtis), a heroic daredevil who wears only white, to a 22,000-mile New York-to-Paris race. As the race gets under way, Fate eliminates all the other contestants through nefarious means except for feminist Maggie Dubois (Wood). But when her car breaks down on its own, she's forced to ride with Leslie, who has his hands full trying to avoid being obliterated by the artillery-laden Hannibal 8 that carries Fate. After getting into a brawl in the wild West and riding an ice floe across the Bering Strait to Siberia, Fate kidnaps Maggie, and the racing teams make an extended soujourn in Carpania as Edwards parodies THE PRISONER OF ZENDA. Then the dastardly Baron von Shtuppe (Ross Martin) tries to take advantage of Fate's resemblance to their ruler, Prince Hapnick, to start a revolution. This enjoyable, out-of-control spectacle, loaded with hysterical sight gags and routines from the silent comedy era, features good work from Lemmon, Martin, and Peter Falk as Fate's henchman, Max. The film was the basis for the WACKY RACES animated children's series.

THE GREAT RACE is a Blake Edwards period comedy about a transcontinental auto race with a raft of memorable characters. Along the way, the racers encounter a polar bear, get into saloon brawls, challenge each other to duels, and have a colossal pie fight.