A screwball comedy. Remember them? 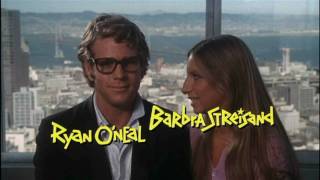 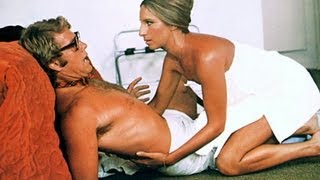 "Let's get this horror show on the road."
- The Judge (LIAM DUNN), to the majority of the film's characters, who have all been hauled into court at the film's climax.

Trouble seems to follow know-it-all Judy Maxwell (Barbra Streisand) wherever she goes. This time it takes the form of Howard Bannister (Ryan O'Neal), a musicologist attending a convention where he's competing for a grant that will allow him to study the musical properties of certain igneous rocks. Judy pursues Howard despite his protests, and his overbearing fiancée, Eunice Burns (Madeline Kahn), begins to question his motives. To make matters more confusing, there are four identical plaid overnight cases circulating through the Bristol Hotel: one contains diamonds and jewelry, another holds top-secret government files, a third is filled with Judy's clothes, and the fourth, Howard's rocks. As the hotel detective tries to steal the case of jewelry, an agent hunts the man who holds the secret papers, while the last two suitcases naturally find their way into the wrong hands in this caper-of-errors. After a sidesplitting chase through the streets of San Francisco, the entire mess gets sorted out in the courtroom of a tense judge who just happens to know Judy all too well. Madeline Kahn's film debut, this madcap adventure is directed by Peter Bogdanovich (PAPER MOON, MASK).

A madcap tale about an absent-minded professor (Ryan O'Neal) and a flaky college girl (Barbra Streisand) in this film from Peter Bogdanovich (THE LAST PICTURE SHOW), WHAT'S UP DOC' is a hilarious salute to the screwball comedies of the 1930s. Highlights include riotous chase scenes in pursuit of all of the following: stolen top-secret government documents, missing jewels, and lost igneous rocks.

27%off
Barbra Streisand Double Feature - The Owl and the Pussycat... (DVD)
$10.90 Super Savings
Add to Cart