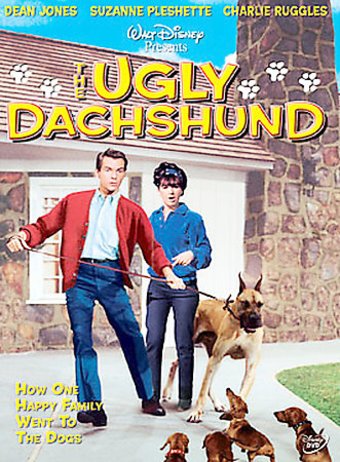 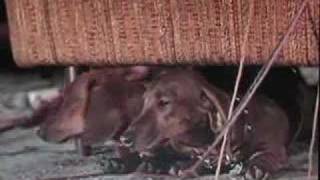 Danke the award-winning dachshund is about to have puppies, and her owner Fran Garrison (Suzanne Pleshette) couldn't be happier, as she dreams of a litter of champions. However, things get a little bit mixed up when the vet talks Fran's husband Jim (Dean Jones) into allowing Danke to nurse Brutus, an abandoned Great Dane puppy. Fran constantly makes fun of the ungainly dog, but Jim wants to keep him, and things get really out of control when Brutus begins to think that he's a little lapdog like Danke!

The Ugly Dachshund
There's magic in the memories as great Disney moments are captured right here for you and your family to enjoy. You don't have to own a pet to enjoy this story of a happy suburban household gone to the dogs! The Garrisons (Dean Jones and Suzanne Pleshette) are the "proud parents" of three adorable dachshund pups -- and one overgrown Great Dane named Brutus, who nevertheless thinks of himself as a dainty dachsie. His identity crisis results in an uproarious series of household crises that reduce the Garrisons' house to shambles -- and viewers to howls of laughter!

When a young married couple decide to keep four dachshunds and a Great Dane, who just happens to think he's a dachshund, they're in for a life of surprises and never-ending canine pranks.

22%off
The Three Lives of Thomasina
$11.70 Super Savings
Add to Cart