The Wonderful Pulitzer Prize Play … becomes one of the Great Motion Pictures of our Time! 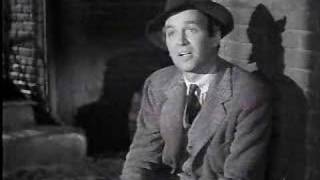 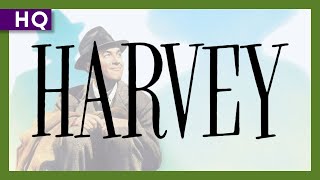 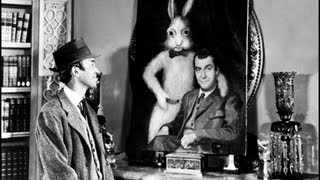 "Myrtle Mae, you have a lot to learn, and I hope you never learn it."
- Veta Louise Simmons (Josephine Hull)
"I've wrestled with reality for thirty-five years, and I'm happy, Doctor, I finally won out over it."
- Elwood P. Dowd (James Stewart)
"Harvey and I have things to do...we sit in the bars...have a drink or two...and play the jukebox. Very soon the faces of the other people turn towards me and smile. They say: 'We don't know your name, mister, but you're all right, all right.' Harvey and I warm ourselves in these golden moments. We came as strangers--soon we have friends. They come over. They sit with us. They drink with us. They talk to us. They tell us about the great big terrible things they've done and the great big wonderful things they're going to do. Their hopes, their regrets. Their loves, their hates. All very large, because nobody ever brings anything small into a bar. Then I introduce them to Harvey, and he's bigger and grander than anything they can offer me. When they leave, they leave impressed. The same people seldom come back."
- Elwood P. Dowd
"I'd just helped Ed Hickey into a taxi. Ed had been mixing his drinks, and I felt he needed conveying. I started to walk down the street when I heard a voice saying: 'Good evening, Mr. Dowd.' I turned, and there was this big white rabbit leaning against a lamppost. Well, I thought nothing of that! Because when you've lived in a town as long as I've lived in this one, you get used to the fact that everybody knows your name."
- Elwood P. Dowd on meeting Harvey for the first time

James Stewart gives one of his finest performances in this lighthearted film, based on the Pulitzer Prize-winning play. Stewart stars as the good-natured Elwood P. Dowd, whose constant companion is Harvey, a six-foot tall rabbit that only he can see. To his sister, Veta Louise, Elwood's obsession with Harvey has been a thorn in the side of her plans to marry off her daughter. But when Veta Louise decides to put Elwood in a mental hospital, a hilarious mix-up occurs and she finds herself committed instead. It's up to Elwood to straighten out the mess with his kindly philosophy, and his "imaginary" friend, in this popular classic that features a Best Supporting Actress Academy Award-winning performance by Josephine Hull.

Elwood is a good-natured, slightly sloshed man whose faithful companion is a 6-foot 3-1/2 inch rabbit that only he can see. When his sister Veta (Josephine Hull) tries to have him committed, she's taken in instead. It's up to Elwood and Harvey to straighten out the mess. James Stewart stars in his most amiable, bumbling mode. The film is based on Mary Chase's Pulitzer Prize-winning play. Academy Award Nominations: 1, including Best Actor: James Stewart. Academy Awards: 1, Best Supporting Actress: Josephine Hull.

20%off
The Greatest Adventures of the Bible: Easter Story
$8 Super Savings
Add to Cart
(10)

Alvin and the Chipmunks: The Mystery of the Easter Chipmunk
$16.10 Super Savings
Add to Cart
(6)