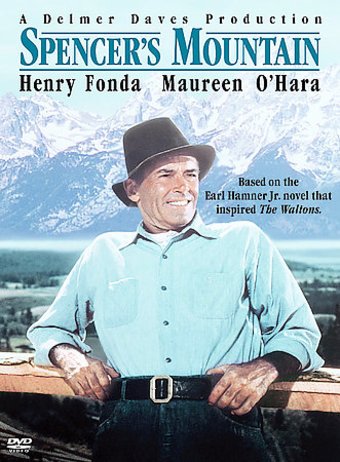 A clever take on life in Appalachia, SPENCER'S MOUNTAIN is a warm film. Its examination of the rustic frontier family, the Spencers, is sometimes funny, sometimes morose, but always striking. Henry Fonda stars as the macho head of the family, Clay Spencer, a dedicated worker, and an even more dedicated drinker. As Clay breaks his back putting food on the Spencer table, his wife Olivia (Maureen O'Hara) holds down the fort. Things seem promising for the Spencer family. Clay and Grandpa Spencer (Donald Crisp) are designing a new home and their oldest son Clayboy (James MacArthur) is planning to go off to college. However when Clayboy starts a romance with the daughter of his father's employer, Clay's job is put on the line and the Spencers suffer a family crisis.

SPENCER'S MOUNTAIN is the feature film that inspired the hit TV series, THE WALTONS. As always, director Delmer Daves breathes life into his cast. Henry Fonda's performance of Clay--the drinking, crass, hard-headed head of the family--bears a slight resemblance to his character, Norman, in ON GOLDEN POND.

17%off
The Homecoming: A Christmas Story
$12.50 Super Savings
Add to Cart