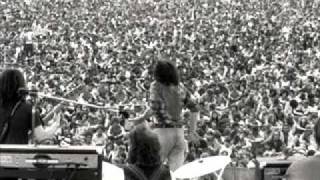 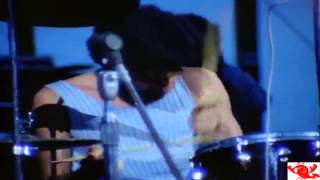 Audio Mixers: Eric Blackstead; Gene Paul.
Audio Remasterer: Dave Schultz.
After the multi-platinum success of Music from the Original Soundtrack and More: Woodstock that accompanied Michael Wadleigh's documentary film Woodstock (two million copies sold and it spent four consecutive weeks at the top of the Billboard charts, and even a Top 20 spot on its R&B chart!), Woodstock Two was inevitable as a sequel. Released as a double LP in 1971 with more stills from the film -- though none of the music here was included -- this set featured many of the same artists who'd appeared on the first volume, with two additions: Mountain, and Melanie. If anything, this set, more concise and more focused, is a better bet than its predecessor. Disc one is a stunner on more than one level. First, there are three tracks by Jimi Hendrix and his expanded lineup after breaking up the Experience (adding guitarist Larry Lee), and a trio of percussionists along with Mitch Mitchell and bassist Billy Cox. There's the killer "Jam Back at the House," which rolls in riffs and an instrumental array of tunes from his catalog including "Rainy Day Dream Away"; there's a killer take on "Izabella" that's raggedy but full of killer improvisation -- check the interaction between Cox and Mitchell -- and "Get My Heart Back Together," also known as "Hear My Train A'Comin'." These 20 minutes of music make it worth the purchase of this collection if you don't already possess the Jimi Hendrix Live at Woodstock disc.
Jefferson Airplane is also here with an extra 12 minutes of music. Judging by this contribution and the inclusion of "Volunteers," on volume 1, this ranks as one of their greatest live sets ever issued. They begin "Saturday Afternoon/Won't You Try" with a medley of tunes from After Bathing at Baxter's, issued early on in their career. The vocal performances by Marty Balin, Grace Slick, and Paul Kantner are simply stellar, but Jorma Kaukonen's guitar as a guiding light also really shines here, and it screams on their other selection, "Eskimo Blue Day," from the Volunteers album, even if its basic structure aped Bob Dylan's "All Along the Watchtower." Disc one ends with the Butterfield Blues Band redeeming themselves with Little Walter's "Everything's Gonna Be Alright," after the indulgent debacle of "Love March" on volume one.
Disc Two features a trio of fine cuts by Crosby, Stills, Nash & Young including "Marrakesh Express," and a pair from Mountain: the stellar rocker "Blood of the Sun," and the more pastoral "Theme from an Imaginary Western." Canned Heat's 13-minute "Woodstock Boogie" is a bit monotonous, but it's a blast all the same. The tracks by Melanie and Joan Baez included here add nothing to this set and should have been left off in favor of some other artists who weren't included on either volume, but that's personal preference. The Rhino edition of Woodstock Two contains new liner notes by Gene Sculatti, new photos, and completely remastered sound that's a grand improvement on any CD edition released thus far. ~ Thom Jurek