The Rolling Stones Rare and Unseen 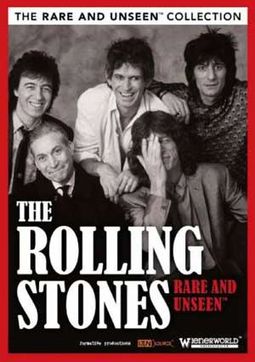 An inside look at the sheer audacity of the band that took R&B and made it into mainstream rock. From small time band to megastar rockers, The Stones have had an immeasurable impact in the music world. They played, they recorded and they conquered the planet for five decades. This brand new DVD release is a collection of rare footage you won't find elsewhere. Features original rare film and videos of the band, newsreels and photographs from private collections. Including Mick Jagger on British investigative TV series "World in Action", Keith Richards at the Berlin Film Festival, Charlie Watts with some rare soundbites, Bill Wyman talks tours and life, rare footage of Brian Jones, unseen interview footage from Belfast 1964, rare and unseen footage of each of the band members talking, local TV reports thought lost and now restored and nostalgic tour footage.

This collection of rare and previously unreleased vintage footage of the Rolling Stones includes interviews with Mick Jagger, Keith Richards, and the usually silent Charlie Watts, as well as images of the band's late founder Brian Jones that date from 1964.