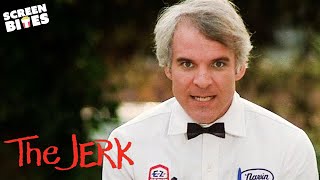 "I was born a poor black child."
- Navin Johnson (Steve Martin), narrating the story of his life
"He hates these cans!"
- Navin, fleeing a madman (M. Emmet Walsh) with a gun

Navin Johnson, a none-too-bright white boy raised by a family of black sharecroppers, somehow manages to reach adulthood without ever discovering he was adopted. His parents finally tell him the truth on his birthday and, shocked by the news, he decides to head off to the big city to seek his fortune. Although he embarks on his odyssey with Candide-like optimism, Navin soon learns the cruel ways of the world as his crazy invention--a device to stop one's glasses from sliding--leads him from rags to riches and back to rags. Steve Martin is riotous in this no-holds-barred broad slapstick comedy, with Bernadette Peters playing his accepting love interest. Jackie Mason, M. Emmet Walsh, and Bill Macy are excellent in small roles, but the focus is always on Martin, who is at his goofy best in a film loaded with hysterical sight gags and a dog whose name cannot be said on television.