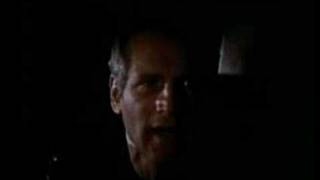 "Violence is killing this sport, dragging it through the mud."

A rougher version of George Roy Hill's pet theme of men as overaged adolescents, SLAP SHOT stars Paul Newman as Reggie Dunlop, the venerable player-coach of the Charlestown Chiefs, a fifth-rate minor league hockey team. When their blue-collar town falls prey to Rust Belt ills of the 1970s, attendance drops, and the greedy owner starts looking for a buyer, anxious to cash out. Dunlop is informed that the players need to crank up the box office to keep their jobs in what will likely be their last season. To the coach's dismay, general manager Joe McGrath (Strother Martin) imports the Hanson brothers, a hockey Three Stooges who like to assault soda machines and play with toys. But once Dunlop turns them loose, they're a Panzer division on ice, and the team starts winning by adopting their bone-crushing style. Although the team is on the upswing, Dunlop's wife, Francine (Jennifer Warren), seems to be through with him, and the isolated wives of the other players aren't much happier with their fate. This sidesplitting, profanity saturated film is one of the funniest ever made about any sport. While writer Nancy Dowd intended to probe darker issues--such as the greed of ownership, the blood lust of fans, and the childishness of the players--Hill submerges them in raucous laughter. Newman is near his peak as the romantic, manipulative, womanizing, hard-drinking coach, and the high-sticking Hanson brothers achieve comic immortality in their only film appearance.

Paul Newman is the over-the-hill player-coach of a pathetic minor league hockey team in blue-collar Pennsylvania. These working-class sportsmen find their livelihoods threatened when the owner of the team decides to dissolve the unsuccessful franchise so that he can make some quick cash. But then an improbable troika, with its absurd enthusiasm and violent playing style, inspires what had previously been a collection of lethargic prima donnas to amass an impressive string of victories. But is a team worth saving if it has to bash heads and draw blood to fill the seats--and win'