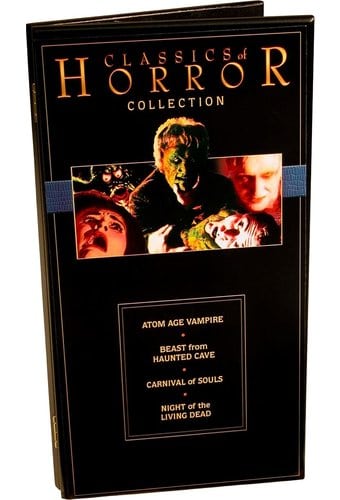 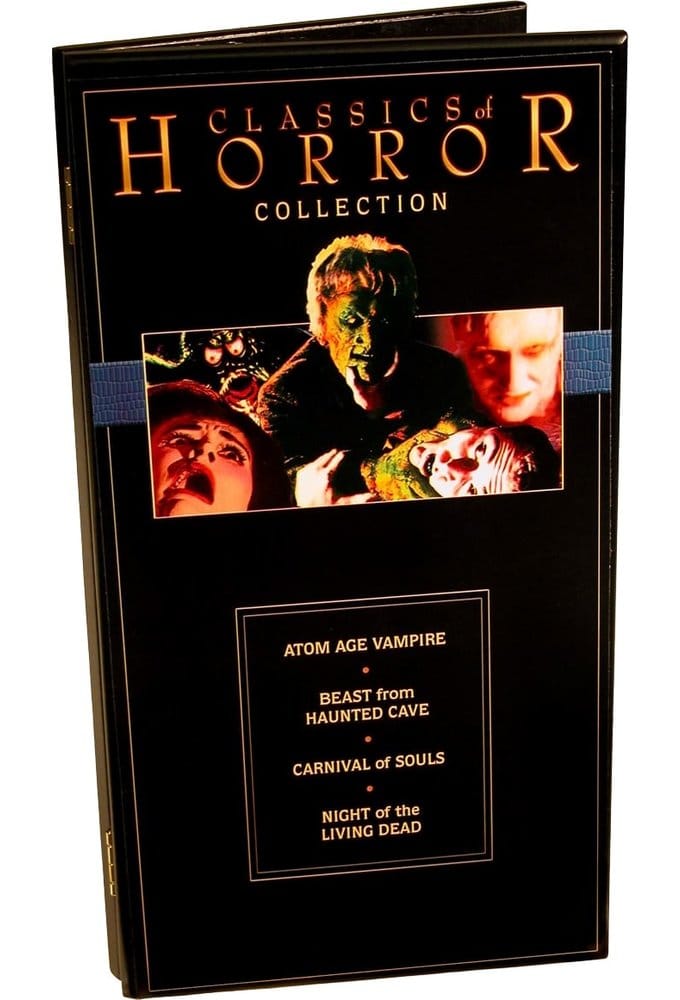 Packaged in a beautiful black-lacquered wooden storage case, this DVD collection includes the movies Atom Age Vampire, Beast from Haunted Cave, Carnival of Souls and Night of the Living Dead.

ATOM AGE VAMPIRE: Made in Italy, ATOM AGE VAMPIRE deals with a mad scientist who must kill young women and rip out their glands in order to restore a sexy dancer's disfigured face. But he also has to struggle with his own Jekyll & Hyde-like transformations into a lizard-man, fighting off the dancer's trench-coated boyfriend and battling his own jealous assistant.

BEAST FROM HAUNTED CAVE: Monte Hellman, who would later go on to create the cult classics TWO-LANE BLACKTOP and THE SHOOTING, directs this Roger Corman B-picture about a giant creature that attacks a group of unsuspecting victims in the South Dakota mountains. Gil Jackson (Michael Forest) is a handsome ski instructor who gets more than he bargained for when he agrees to be a guide for Alex Ward (Frank Wolff) and his group of bandit friends. The leader of the gang, Alex convinces his girlfriend, Gypsy Berlin (Sheila Carol), to seduce Gil while he and his cronies pull off a major gold heist. They then embark on a trek through the mountainside to lie low while the authorities search for the robbers. Gil eventually catches onto their criminal ways, and also manages to win the heart of Gypsy. What no one could have projected is the gigantic beast that resides in a nearby cave and eats human beings like popcorn. As Gil and Gypsy try to escape from Alex, the beast closes in on all of them, culminating in a gigantic battle in a cave to decide who lives, and who dies. Hellman's exploitation thriller is low-budget fun in the truest sense of the term.

CARNIVAL OF SOULS: Made in 1962 on an extremely low budget, Herk Harvey's classic CARNIVAL OF SOULS has become legendary for its ability to create a tensely creepy atmosphere with virtually no special effects. A young woman (Candace Hilligoss) is involved in a car crash when her car falls off a bridge during a drag race. After she pulls herself from the river, she moves to a new town to take a job as a church organist. Meanwhile, a distinctly eerie and hollow-faced man seems to be following her wherever she goes, while an abandoned lakeside amusement park beckons her with an almost gravitational pull. The effective organ score enhances the film to great effect, as do the bleak landscapes of Utah's salt flats.

NIGHT OF THE LIVING DEAD: George Romero's NIGHT OF THE LIVING DEAD is a low-budget homegrown classic that had great difficulty finding a distributor at the time of its 1968 release, and has since become one of the most influential horror films of all time. Aside from its visceral impact years before realistic gore became the fashion, the film is also important for its portrayal of a black man as the protagonist during a time when race relations were an extremely sensitive issue in the United States.

Seven people secluded in a Pennsylvania farmhouse face relentless attacks by reanimated corpses seeking to eat their flesh. The group, which includes a married couple and their daughter, a pair of young lovers, and an African-American man, try to keep their sanity as the living dead make endless dogged attempts to enter the house. The only way to stop the zombies is to burn them or deal a severe blow to their heads. Radio news reports tell of the plague taking over the eastern United States, while the ever-decreasing band of survivors rapidly loses ground in the battle to both keep peace with one another and stay alive.