Attack of the Giant Leeches

Slimy monsters from the depths of the Everglades need blood to survive. 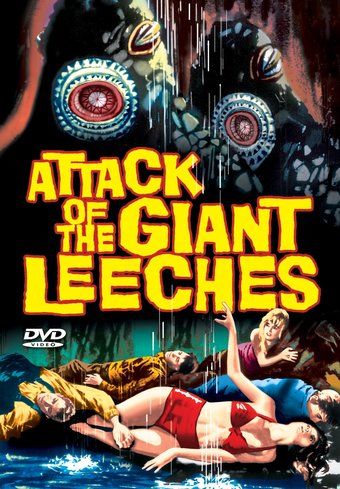 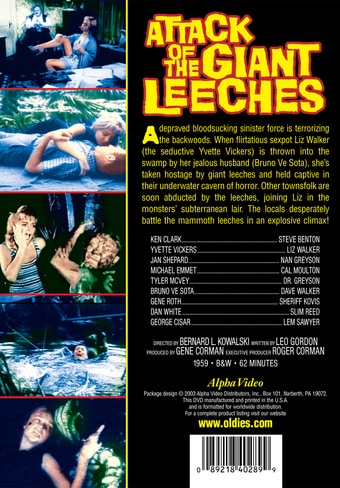 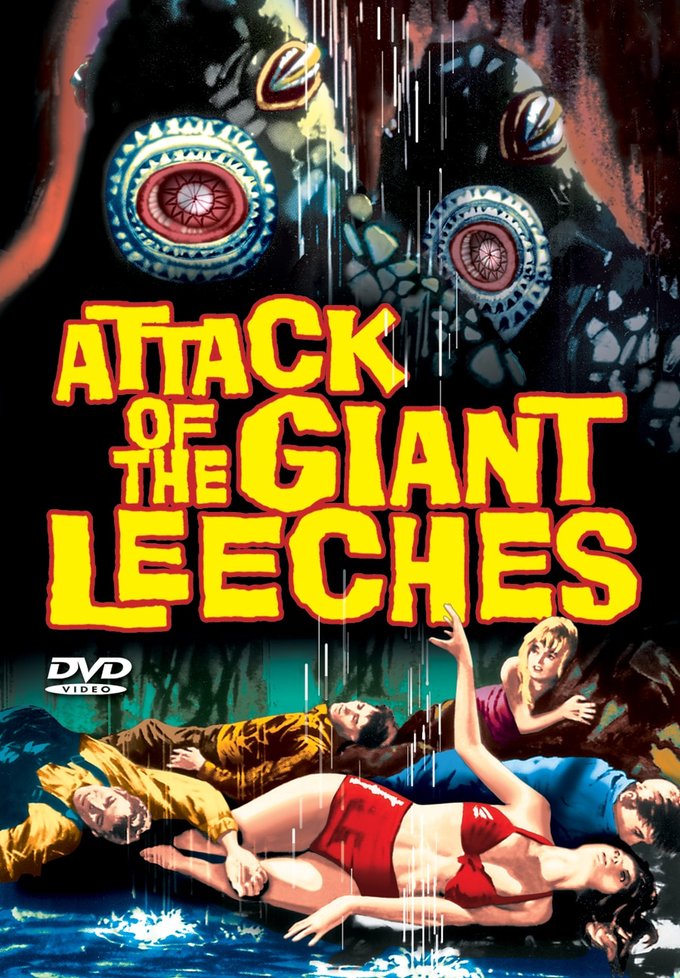 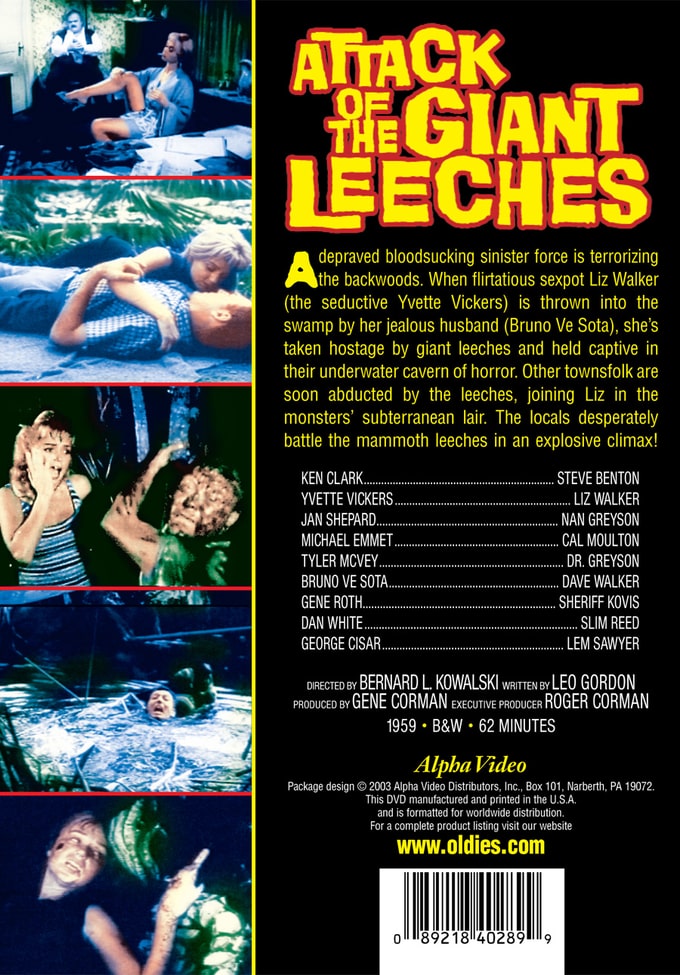 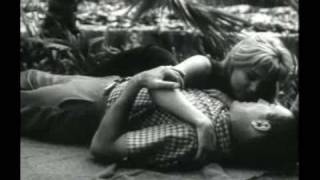 A depraved bloodsucking sinister force is terrorizing the backwoods. When flirtatious sexpot Liz Walker (the seductive Yvette Vickers) is thrown into the swamp by her jealous husband (Bruno Ve Sota), she's taken hostage by giant leeches and held captive in their underwater cavern of horror. Other townsfolk are soon abducted by the leeches, joining Liz in the monsters' subterranean lair. The locals desperately battle the mammoth leeches in an explosive climax!

Roger Corman executive produced this flick about men in octopus-like "Leech" costumes terrorizing residents of a swamp. When irradiated leeches grow huge in a Southern bayou, a local storekeeper sees his chance to be rid of his trashy, two-timing wife--feed her to the leeches!

Monsters | Mutants | Betrayal | Theatrical Release
This product is made-on-demand by the manufacturer using DVD-R recordable media. Almost all DVD players can play DVD-Rs (except for some older models made before 2000) - please consult your owner's manual for formats compatible with your player. These DVD-Rs may not play on all computers or DVD player/recorders. To address this, the manufacturer recommends viewing this product on a DVD player that does not have recording capability.

Customer Rating:
Based on 5649 ratings.


I put this movie in with high expectations for some reason. The plot I thought was awesome, what could be better than GIANT LEECHES!?! Well, personally I thought the leech costumes were awesome, for 1959. The ending of this movie is about climactic as watchin paint dry. If you're looking for a good chuckle and something to do on a rainy day, pop this flick in.


This movie is largely a cronk creature feature. The monsters are well done and the colorful characters are comical. What is not pleasant is the hero. The male lead is just about as spitefully doubting and apathetic as the stereotypical town sheriff, and most of the dialogue centers on coffee.


I bought this expecting a funny attempt at a horror movie.. Well it wasn't "scary" but I was surprised how much I enjoyed this movie. The fact is that it is low budget.. You can tell because the main sorce of lighting at night is a flashlight pionted on the actors.. The other obvious is the leech costumes. BUT... you don't see them on screen as much as I was expecting.. infact the underwater shots of these leeches are very real looking.. If you have an extra $5.95 in your pocket I recommend this DVD. It is one I can watch over a few times.


An isolated stretch of the Florida Everglades is under attack by giant bloodsuckers, and no I don't mean land developers. Radiation from nearby Cape Canaveral is blamed for causing leeches to mutate into gigantic, intelligent monsters.
Ken Clark is the hero but the reason everyone remembers this movie to-day is Yvette Vickers. This is her best film and yes, I do remember ATTACK OF THE FIFTY FOOT WOMAN. As "Liz baby" she is a trollop with a senstive side. Trapped in a loveless marriage she nearly escapes with
Michael Emmet (later to be in NIGHT OF THE BLOOD BEAST) but in clearly the best scene in the movie, her shotgun weilding husband (Bruno VeSota) forces them both into the swamp where, unknown to all of them, a giant leech is waiting for his nighttime meal!
The monster "costumes" are no more than re-worked garbage bags with suckers attached to one side but I dare you not to squirm in your seat during the scene where the leeches feed on their human captives.
This one was produced by Roger Corman's brother Gene and directed by Bernard Kowalski who would go on to do things like BEAST FROM HAUNTED CAVE. Give it a try, it's better than the average 50's B movie.

Highly recommended, one of the kings of bad cinema.. Movie Lover: robosatan from maine -- April, 17, 2003


This is surely one of the greatest "so bad it's good" movies ever made. From laughable bad acting, a gorgeous leading lady and horrible monster costumes.. this one has it all. Many "bad movies" have a rather boring habit of too much pointless dialogue and not enough action, however "Attack Of The Giant Leeches" doesn't fall into this trap. Whether you are a fan of 50's bad cinema or just wanting to add one disc to your collection, you won't be disappointed by this one.