The carnival limps into town and sets up for another show. To the public, the carnival means exciting performers. To Nick, those performers are "mugs and grifters and riffraff -- all under one tent." Nick should know: he puts the show together. 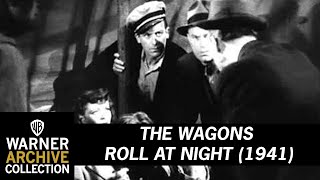 The tents are leaky. The troupers are weary. The carnival limps into town and sets up for another show. To the public, the carnival means exciting performers. To Nick Coster, those performers are "mugs and grifters and riffraff -- all under one tent." Nick should know: he puts the show together. Humphrey Bogart plays Nick, bringing crisp authority to a movie whose midway atmosphere is so alive you can almost taste the caramel corn. Sylvia Sidney, Eddie Albert and Joan Leslie join Bogart in this tale centered on Nick and an up-and-coming lion tamer (Albert) he discovers. The story, a reworking of 1937's Kid Galahad, is a superb example of how studio-system filmmakers kept successful plotlines rolling. Bogart's career was finally rolling, too; his next film would make him an undisputed star. The title: The Maltese Falcon.

In the 1930s and 1940s, Warner Bros. developed a positive genius for remaking earlier films in new, disguised fashion, retaining the plotlines but altering the circumstances and character names. WAGONS ROLL AT NIGHT was a 1941 reworking of the prizefight drama KID GALAHAD, filmed only four years earlier. The original film was about a naive boxer who falls in love with the sister of his semi-crooked manager. The remake stars Eddie Albert as a bucolic lion tamer, Humphrey Bogart (who'd been the villain in KID GALAHAD) as the circus manager, and Joan Leslie as the girl. The earlier film also included Bette Davis as the manager's put-upon mistress; her counterpart in WAGONS ROLL AT NIGHT is Sylvia Sidney as a worldly circus star. It's amazing how well the prizefight milieu adapts itself to the lion cage, and for this alone WAGONS ROLL AT NIGHT is memorable.

Adventure | Romance | Murder | Romances | Love
This product is made-on-demand by the manufacturer using DVD-R recordable media. Almost all DVD players can play DVD-Rs (except for some older models made before 2000) - please consult your owner's manual for formats compatible with your player. These DVD-Rs may not play on all computers or DVD player/recorders. To address this, the manufacturer recommends viewing this product on a DVD player that does not have recording capability.

22%off
The Greatest Showman
$11.70 Super Savings
Add to Cart