Supreme in Theme! Gigantic in Execution! 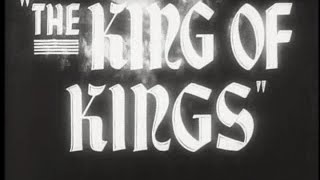 The King Of Kings is the Greatest Story Ever Told as only Cecil B. DeMille could tell it. In 1927, working with the biggest budget in the history of Hollywood, DeMille spun the life and Passion of Christ into one of the highest-grossing films of all time. Featuring text drawn directly from the Bible, a cast of thousands, and a cinematic bag of tricks that could belong to none other than Hollywood's greatest showman, The King Of Kings is at once spectacular and deeply reverent-part Gospel, part Technicolor epic. Criterion is proud to present one of the best-loved films ever made in a two-disc edition featuring both the 112 minute general release version and the rarely seen 155 minute cut that premiered at the grand opening of Grauman's Chinese Theatre.

Cecil B. DeMille, Paramount's master showman, would revisit the biblical epic many times over the course of his long and varied career, culminating in 1956 with his grand-scale version of THE TEN COMMANDMENTS. The beginning of his lifelong fascination with biblical history can be seen in this silent interpretation of the life of Christ that combines DeMille's love of visual spectacle and historical realism with his penchant for high melodrama. DeMille retells the story from the point of view of Mary Magdalene (Dorothy Cumming), once a courtesan for the decadent and gluttonous empire of Rome, who is made pure by Jesus' (H.B. Warner) love. Taking text directly from the Bible, DeMille follows Jesus' rise to greatness as he humbly performs miracles and amasses thousands of devout followers. Jesus is introduced in the film through the healed eyes of a blind child, aglow with the light of faith. DeMille stylishly combines early Hollywood glamor with deep religious reverence in this classic adaptation that culminates in a Technicolor segment depicting the Resurrection. The film was remade by Nicholas Ray in 1961, with Jeffrey Hunter in the lead role.

Cecil B. DeMille interprets the life of Christ through the eyes of Mary Magdalene in this original silent epic featuring the infamous parting of the Red Sea.

18%off
The Ten Commandments
$10.60 Super Savings
Add to Cart

The Sign of the Cross
$18.20 Super Savings
Add to Cart

79%off
Mickey Mantle: In His Own Words
$2.99 Super Savings
Add to Cart