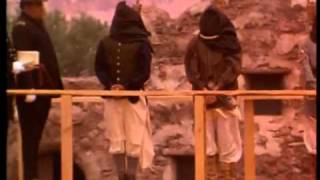 "At times it seemed we were chasing a spirit more than a man."
- 2nd Lt. Britton Davis (Matt Damon)
"Do with me what you please. Once I moved about like the wind. Now I surrender to you and that is all."
- Geronimo (Wes Studi)

This 1993 'revisionist' Western tells the story of the white army who came to remove Apache warrior Geronimo (Wes Studi) from his land and the struggles the Indians put up in order to keep their land. Led by two Army leaders (Gene Hackman and Robert Duvall), the government tries to extract the Indians from the land, using both force and lies. Director Walter Hill (48 HOURS, THE WARRIORS) looks at both sides of the conflict and shoots beautiful cinematography in the American Southwest.


The story of the Apache renegade who waged a fierce, lifelong war against white settlers and the U.S. Cavalry. Academy Award Nominations: Best Sound.

In 1885, the United States, under the policy of "manifest destiny," had nearly finished conquering the west and its native peoples. The next step, the government believed, was to resettle the Apaches, but the powerful, rebellious warrior Geronimo threatened their plans. So Cavalry troops rode out to arrest him -- but they failed in their mission and he escaped.
Thus began a campaign in which the army deployed more than a quarter of its men to track down the Indian leader. Although the soldiers greatly outnumbered Geronimo's small band of followers, he eluded capture for more than five years, as the cavalry chased him through Arizona, New Mexico, and all the way down to Mexico.

24%off
Bury My Heart at Wounded Knee
$7.60 Super Savings
Add to Cart

The Last of the Mohicans (DVD)
$5.80 Super Savings
Add to Cart