The Last of the Mohicans R 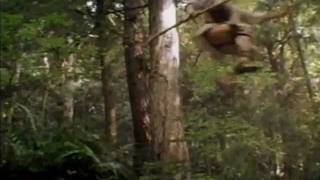 The Last of the Mohicans 1992 Trailer

"Stay alive--no matter what occurs--I will find you."
- Hawkeye (Daniel Day-Lewis) to Cora (Madeline Stowe)
"And you call yourself an Englishman and loyal subject of His Majesty'"--British officer to Hawkeye
"I do not call myself subject to much at all."
- Hawkeye
"What are you looking at, sir'"--Cora to Hawkeye
"Why, I'm looking at you, miss."
- Hawkeye

Cora (Madeleine Stowe) and her younger sister, Alice (Jodhi May), both recent arrivals to the colonies, are being escorted to their father, Colonel Munro (Maurice Roeves), by a troop of British soldiers. Along the way they are ambushed by a Huron war party led by Magua (Wes Studi), a sinister warrior with a blood vendetta against Munro. Munro's soldiers are wiped out and Cora herself is nearly killed by Magua but is saved at the last moment by Hawkeye (Daniel Day-Lewis), a white trapper raised by the Mohican tribe. Hawkeye promises to take Cora and her sister safely to their father, and along the way Cora and the intense Hawkeye fall in love. Together they must survive wilderness, war, and the relentless pursuit of Magua.

Returning to the theme of a great love threatened by overwhelming circumstances, director Michael Mann hits the mark with an adaptation that captures the essence of the book and its historical details perfectly. Day-Lewis and Stowe are beautiful to watch, delivering moving performances as two people trying to hold on to each other in times of war. In addition, the Native American political activist Russell Means makes an oustanding film debut as Chingachgook, Hawkeye's adopted father and last of the Mohicans.

Based on James Fenimore Cooper's novel of the same name, THE LAST OF THE MOHICANS is a lush, sweeping epic about the brutal realities of building a new world. Daniel Day-Lewis and Madeleine Stowe are strangers who meet and fall in love amid the chaos of war and the construction of a new country. Stirring and powerful, THE LAST OF THE MOHICANS delivers action, romance, history, and scenic beauty.