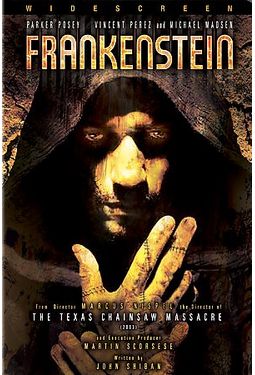 For the past 200 years, brilliant and disturbed Dr. Victor Helios (Thomas Kretschmann, IN ENEMY HANDS, THE PIANIST) has kept himself and his masterpiece monster, Deucalion (Vincent Perez, THE CROW: CITY OF ANGELS) alive through his work in genetics. They have set up shop in New Orleans, where the Doctor has started a genome research institute, where he is going about using his prototype to create a master race, which will eventually take over the Earth from the conventionally-produced humans. But Detective O'Connor (Parker Posey, BEST IN SHOW, THE HOUSE OF YES) is investigating the spate of gruesome murders that have plagued the city, and the trail leads her to the doctor. Meanwhile, Helios's tormented creations are becoming increasingly erratic in their behavior. Originally conceived as a pilot for a television series, the script for FRANKENSTEIN was directed by Marcus Nispel (THE TEXAS CHAINSAW MASSACRE) with Martin Scorcese as executive producer. The star-studded cast also includes Adam Goldberg (A BEAUTIFUL MIND, SAVING PRIVATE RYAN), Michael Madsen (KILL BILL, RESERVOIR DOGS), and Ivana Milicevic (LOVE ACTUALLY, ENEMY OF THE STATE).