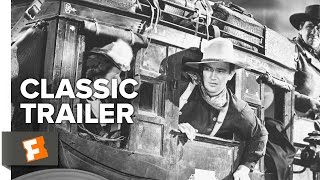 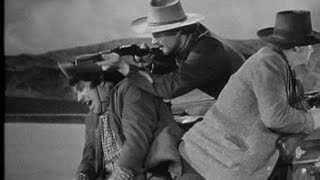 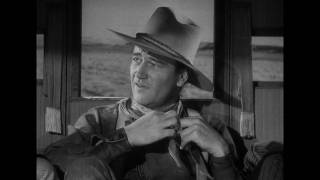 Regarded by many as the best Western ever made, STAGECOACH shot John Wayne to stardom and elevated the prestige of a genre that had hitherto been considered a B-movie province. With rumors in the air of a possible Apache attack, a motley group of travelers in a small New Mexico town board the Overland Stage bound for Lordsburg. Among them are the pregnant Lucy Mallory (Louise Platt); timid liquor salesman Peacock (Donald Meek); Hatfield, an aloof gambler (John Carradine); Gatewood (Berton Churchill), a pompous, embezzling banker; and two who have been exiled from town, alcoholic Doc Boone (Thomas Mitchell) and Dallas (Clair Trevor), a lady of the evening. Along the trail, they pick up the Ringo Kid (John Wayne), an outlaw who's escaped from prison to take revenge on the Plummer brothers for destroying his family and framing him for murder. As their journey progresses, the hypocrisy of the supposedly respectable passengers becomes clear, and it's the tainted outsiders who display courage and humanity. Described by Orson Welles, who watched the film innumerable times before making CITIZEN KANE, as his cinematic textbook, STAGECOACH is superbly made in every respect, layering humor and sharp characterization into an exciting plot that includes a spectacularly photographed chase in Monument Valley.

Under the stress of an Indian attack, the passengers of a stagecoach reveal their genuine personalities.